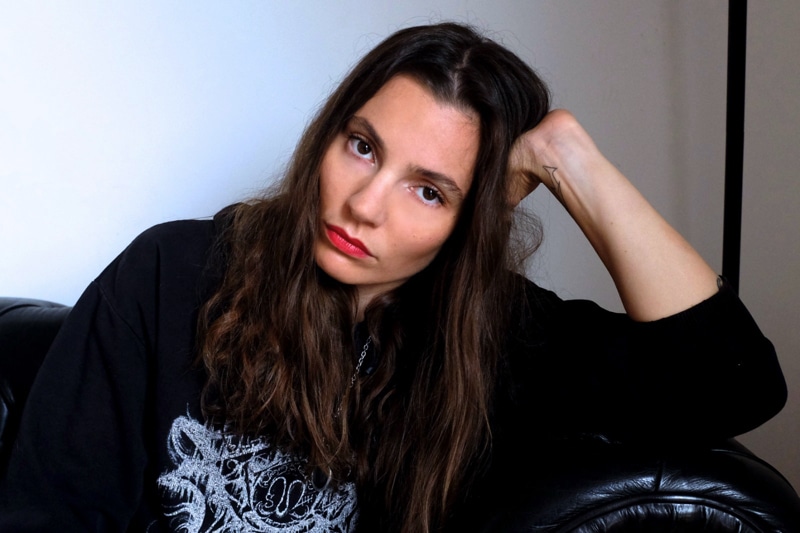 Lola Quivoron made her Cannes debut with a provocative tour-de-force of daring motorcycle stunts and a heroine, who behind her tough facade, is a feminist fighter in a world of macho men.

Rodeo has much the same striking visual allure as Julia Docournau’s Palme d’Or winner Titane, particularly in the cold blue and green aesthetic; both directors graduated from La Fémis. Titane daringly explored obsession between a woman and her car, Rodeo has a more humane angle but Quivoron’s heroine often falls too easily onto her feet given the difficult path she has chosen .

A shouty opening sequence sets the tone for the rest of the feature: We briefly meet Julia (Ledru) before she disappears, obviously homeless. On an illegal racecourse in the countryside, she embarks on a vain attempt to kick start motorbike stunt racing with a gang of macho ‘dirt riders’. But disaster strikes early when one of the guys Abra (Okebwan) has an accident and later dies in the hospital -“they pulled the plug on him” comments one of his friends.

Julia is able to connect with the big boss Domino, who operates a ‘swiping’ ring involving expensive motor cycles from the seclusion of his prison cell. She persuades him to let her sleep in the garage, where the gang’s top of the range machines are housed. For this, Julia has to swipe on order a motor cycle the boss has his eye on. Julia will fill her bag with small stones, telling the owner of the motor cycle she will just have a quick go on one of the bikes, leaving him her bag “with my keys, identity and credit cards”. Julia will repeat this modus-operandi successfully throughout the film. The guys in the garage, among them Kais (Lafki), Mous (Hamdi), and Ben (Sutton), are not sure how to take Julia.  there’s definite frisson with Kais, but the chemistry fizzles with her and Domino’s long-suffering wife Ophélie (Buresi) and Domino soon cottons on to the situation. Rodeo culminates with a high octane robbery – re allong that famous scene in Derek Cianfrance’s The Place Beyond the Pines – with a massive trailer of glossy motorcycles, unfolding like a ballet sequence, using quad bikes. But Quivoron has a dramatic yet poetic ending in store for her heroine Julia.

Rodeo is a rollercoaster ride, but Julia’s temper tantrums often show her vulnerability. She cannot allow herself any feelings for the opposite sex, hiding behind her men-eating persona. But her desired liaison with Ophélie is doomed. Somehow we see a perverse Cinderella motive: Julia wants to be invited to the ball of motorbikes and mayhem – but because of her gender she is reduced to the villain of the piece. The daring stunts provide the cut and thrust of Quivoron’s lesbian themed arthouse drama but, the heart and soul is Julia’s search for an identity not determined by gender.AS