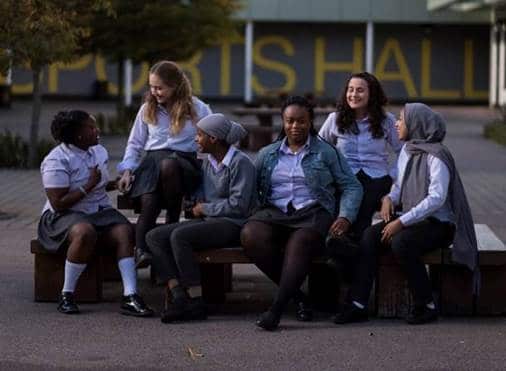 Rocks is a sharp-witted sassy sashay into life on the multicultural streets of east London for a group of teenage schoolgirls .

British director Sarah Gavron has a keen aptitude for stories about often marginalised outsiders struggling to fit in or cope with exceptional challenges as we saw in Village at the End of the World, Brick Lane and Suffragette. Rocks is back on the same territory, its upbeat realism driven forward by convincing characters and drenched in dramatic heft.

In a Hackney council estate British-Nigerian teenager Shola ‘Rocks’ Omotoso (Bukky Bakray) lives with her younger brother (D’angelou Osei Kissiedu) and a mother who soon clears off, leaving the two of them penniless and bereft. So Rocks is left to look after her kid brother while desperately avoiding the social services and coping with her own sense of loss.

Authored by British-Nigerian Theresa Ikoko, Claire Wilson and Gavron herself who have spent a year of workshopping with the girls to produce something fresh and authentic that never feels clunky in combining the young girls’ naivety with their sense of streetwise cockiness. All the cast are newcomers who have come to the project via various youth clubs, and they should be proud of their feisty performances; some are more appealing than others.

Sumaya is particularly likeable with her strong moral compass and genuine kindness, while Bakray is more laid-back and finds it difficult to admit to failure or defeat, despite the sweet-natured support of her easy-going younger brother (seven-year-old Kissiedu is astonishing).

Gavron lets the camera roll on some naturalistic performances and this gives the piece its raucous and unstructured charm, while a steely narrative works away in the background assuring highs and lows on the emotional front, peppered throughout rather than left to the finale. What emerges is a feeling of reality that captures the zeitgeist of modern teenage life in the ‘Hood. MT

ROCKS IS on NETFLIX