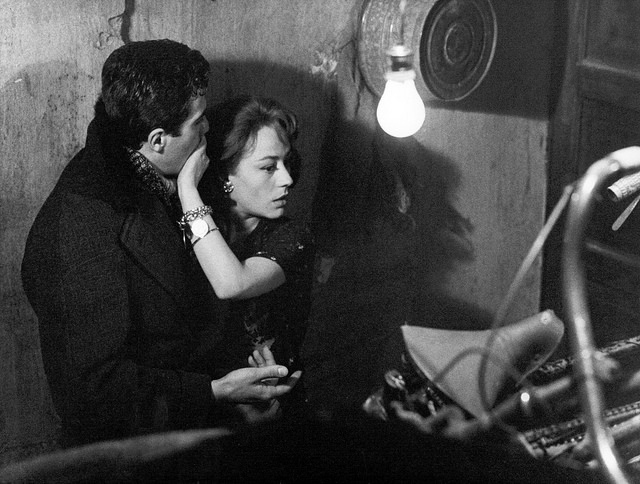 After La Terra Trema (1948), Visconti returned to neo-realism and films exploring the cultural divide between the North and South of Italy as featured, twelve years later, in his operatic length feature: ROCCO AND HIS BROTHERS: an acerbic criticism of Italian social reality, “where the split between South and North was never so harsh, the prejudice of the North never so never fundamental, even though it was the era of the Italian economic miracle”.

Based on works by Giovanni Verga, Antonio Gramsci and Carlo Levi (Christ Stopped at Eboli), Visconti asked a team of writers to develop a script which would show “that people from the South who moved to the North for economic reasons would never be treated like brothers, but as strangers and intruders, who would have to do the most dirty work”. As usual with Visconti, the original script team was dismissed and Suso Cecchi d’Amico,Visconti’s favourite script writer, whose story was the basis of Rocco, finished the work with Visconti. As it happens, the split between the two geographical parts of Italy is still virulent today with the “Liga Nord”, a main political party, whose main focus is the separation between North and The Meridione still well-supported even now.

Before shooting began Visconti fell out with his regular producer Franco Christaldi who refused to cast Annie Girardot; instead, for reasons of box-office, he proposed Brigitte Bardot or Pascale Petit – “just fit to be engaged as manicurists”- according to Visconti. Goffredo Lombardo of ‘Titanus’ took over production, after having reluctantly agreed to cast Girardot.

When Rosaria Parondi (Paxinou) arrives with her three grown-ups sons Rocco (Delon), Simone (Salvatori), Ciro (Cartier) and their kid brother Luca in Milan, they meet the in-laws of their oldest brothers Vincenco (Focas), engaged to Ginetta (Cardinale). Vincenco has integrated well, but his newly arrived family is viewed with suspicion by the Milanese family of Ginetta. Vincence, who had been a boxer, secures fights for his brothers Rocco and Simone, but cannot do anything about the harsh living conditions his newly arrived family encounters. But Rosaria, a tough and dominant matriarch, solves this problem, and the family move into one of the high rise blocks on the outskrits of Milan. Simone falls in love with the prostitute Nadia, who lives two flights up. He neglects his boxing, and is beaten up brutally by an opponent. Rocco, on the other hand, takes his responsibilities seriously, even though he hates boxing, he achieves much more than Simone, who is a street fighter by nature. Having surpassed Simone in the ring, Rocco soon takes Nadia away from Simone, who reacts brutally, raping Nadia, even though Rocco has left her, asking her to return to Simone: “You are all he has”. But Simone only wants revenge. Visconti wanted to shoot he now famous murder scene in Milan’s ‘Idrobasa’, but the city council gave him no permission. They accused Visconti of showing no gratitude to the city of his birth. Finally, the scene was shot near lake Fogliano, near Lattina. (In real life, Salvatori married Giradout, the couple had a daughter).

After winning the Grand Jury Prix at Venice in 1960, ROCCO was censored and could not be shown at all in certain parts of Italy. Visconti replied with a long letter to the Italian Minister of Culture, accusing him of “wanting to repress the showing of the film altogether – only the media, the public and the parties of the Left have made it possible to be shown in this censored version”.

DOP Giuseppe Rotunno’s wide screen black-and-white images of the desolate suburb the Parondis inhabit belong to the most impressive portraits of Italian neo-realism and he went to shoot The Leopard for Visconti. His fighting scenes in the ring are equally outstanding, never shrinking away from the brutality of this “sport”, particularly when featuring Rocco, who hates violence and uses the fights to punish himself. Delon is the fallen angel, not sure of his gender orientation, he compensates in taking on responsibility for his family; trying to make up for Simone’s crimes, he even returns to the ring for good at the end. Salvatori finally is the coward, masquerading as the bully. When the police come after him he hides, begging for his mother. Girardout’s Nadia is very much in the ‘Carmen’ mould, sensuous and so full of life, a victim of male brutality. This is one of Italy’s finest films, full of intensity and rich complexity; like the Italians themselves. AS

NOW OUT ON BLU-Ray DUAL FORMAT | COURTESY OF MASTERS OF CINEMA, EUREKA