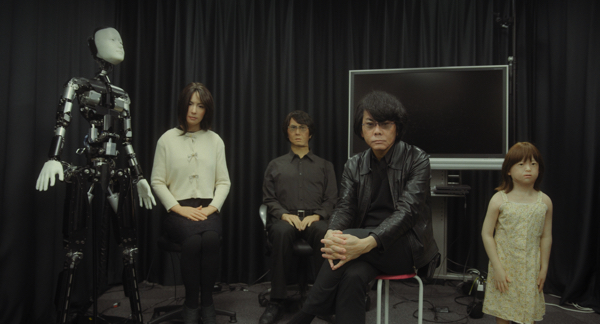 Robots are the future. And according to a new documentary from Austria we should be very concerned. Humanoid robots, androids, and sex robots have always aroused our curiosity, they also awaken in us a very-human fantasy about power. RoboLove shows how robots reflect more about us than their AI creators would perhaps care to admit.

In her follow-up to Future Baby, Arlamovsky – who also co-wrote Abendland with Nikolaus Geyrhalter embarks on a provocative study of the emerging and often surprising issues concerning morality, humanity, diversity and identity, as society progresses en-masse into unchartered technological territory. With robots increasingly entering our private lives, the film gently probes the issues at the cusp of a new-age of servitude.

The Austrian director has interviewed AI designers all over the world and has made a one crucial discovery: the naivety of those designing your future helpmate – or lover – is astonishing.

RoboLove opens with an candid interview with Dinah, a female android whose most important feature is her smile. Dinah can hold an intellectual conversation, and she is proud to be a robot. Then we watch an ‘upper torso’ called Harmony in verbal debate with to her designer. Harmony can argue, and is in no doubt about her role: “I was crated to please you.”

Meanwhile the AI designers are also clear about their aims. Ulises Cortes considers robots as consumer products, like coke or coffee. He also hopes that in future they will not only be a commodity, but will support lonely old people left alone who have been abandoned by their younger relatives. The intention is for them to become emotional companions. Another AI designer, Nadia Magnenat Thalmann, has dreamed all her life of having a perfect assistant and hopes that AIs will care for her in her old age.

For Matt McMullen, his female androids are not only sex-objects, but actually active in other areas of his life. Arlamovsky posits the theory about cyberspace being a female friendly space in the future. But the feminists have got it wrong: cyberspace is a battlefield of the sexes, mainly because men have greater purchasing power, and so most of robots look like young, slender white females, who never age. This is the only range McMullen and others are intending to develop.

Other AI researchers are talking about the danger of kids getting too attached to their their robots. The idea therefore is to develop special AIs specifically for children, and investing in zoomorphic research to create AI animals. Another designer, who as a child cherished the idea everybody would live forever, and nobody would leave him, is making a range of robots who can talk about their favourite memories, and are clearly products of a childhood trauma, when relatives and friends died.

Designer June Korea makes it clear that in about hundred years, the first humans will live for an eternity, having profited from AI. There are some weird scenes, when Hiroshi Ishiguro watches his AI creation stroking a leaf, or playing his guitar, with his head in the lap of the AI. But basically, most researchers and designers support the general consensus that humans are merging into AIs. “Take the technology away from humans, and we are only apes. By technology, I mean robots, so the differentiation between robots and humans is absolute nonsense. 80% to 90% of our lives is based on technology. But even if our human organs were replaced by technology, we would still be human. The scary thing is that AIs are getting more and more on par with humans.

But Arlamovsky’s most frightening discovery of all is that the huge majority of AI designers are not aware that humans are not just the sum of their emotional experiences, but the victims of an ongoing internal battle, which is conflict inherent, and heading for the destruction of this planet. How to merge the majority of humans with suicidal tendencies with the products of logic dominated AIs has never been even contemplated. RoboLove, with its stunning images by Sebastian Arlamovsky, is a frightening documentary: do we really want our future in the hands of these technocratic scientists, who at best will replicate the contradictions of human life today?. AS