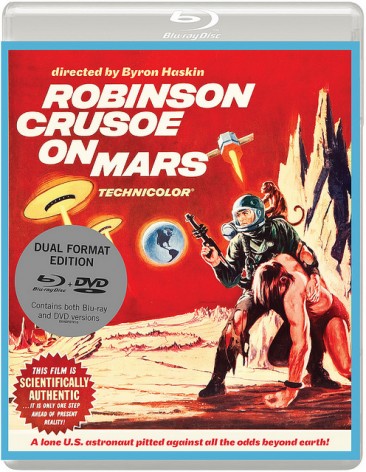 There’s something strangely magical and upliftingly intelligent about Byron Haskin’s sixties space oddity, based on a Daniel Defoe classic, in which an astronaut and a monkey fetch up in Mars after crashing their spacecraft. The credits promise: “One adventure in a million that could happen – tomorrow!” and the inventive visual design was to have a far-reaching influence on fantasy filmmaking on the big screen in the years leading up to the space race.

This was Haskin’s second literary adaptation, after his 1953 thriller The War of the Worlds, based on an H G Wells classic, had the Martians coming in the opposite direction – to Earth – in a similarly engaging and amusing tone, wreaking destruction on our cities whereas Commander Draper (Mantee) and his monkey (Mona) are almost deferential in their visit to Mars, whose arid hostile landscape is spectacularly evoked in its Death Valley locations (Zabriskie Point). Rendered in Arthur Lonergan’s crisp sets (re-using the flying saucers from 1953) and Winton C Hoch’s glowing black and white visuals, the result is a heartening study of Draper’s survival against the odds, with his increasingly faithful, furry friend.

Haskin avoids Cold War allegory here making a more enduring and contemporary social commen: the importance of man’s relationship with the animal kingdom and the struggle of small communities in an increasingly difficult world, seen through Draper’s eventual connection with another being who he names “Friday” (Victor Lundin). Eventually the two manage to escape with Mona in one of the final speculative films before the early 70s Mars landing. Shot in technicolor, the script was written by John C. Higgins and Ib Melchior. MT