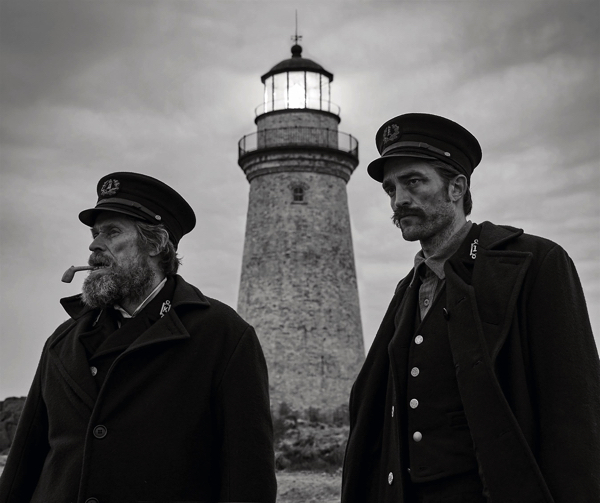 Robert Pattinson and Willem Dafoe are hard-nosed sea salts caught in a battle of wills in this terrifying two-hander set in 1890s Maine.

The Lighthouse is Robert Eggers much anticipated follow-up to The Witch and it certainly doesn’t disappoint. Fuelled by a pent up rage that seethes right through to the biting end of this often claustrophobic thriller, the lauded American auteur adds another cult classic to the New England Gothic genre.

Arriving from Canada Ephraim Winslow (Pattinson) joins the craggy and flatulent old retainer Thomas Wake (Dafoe) to offer support as the winter sets in and the weather worsens. The stormy dynamic of their emotional voyage is fraught with hallucinatory twists and turns in a gripping yet enigmatic chiller that relies on atmosphere and a mounting dread to tell a stir-crazy tale infused with mystery, myth and legend. The haunting atmospheric soundscape is particularly redolent of solitude and isolation setting a plangent tone for what is to come.

Echoes of Moby Dick are clearly felt but this artful drama is more akin to Robert O’Flaherty’s 1934 document Man of Aran with its dense grainy black and white images and rugged sense of place. The Movie-tone aspect ratio focuses the attention on the keepers’ constantly fleeting expressions, like storm clouds scudding by. Louise Ford’s editing borrows from Soviet Montage outings such as The Diplomatic Pouch (1927) and Old and New (1929). Eggers scripts with his brother Max, and his regular cinematographer Jarin Blaschke captures the mournful misery of it all in chiaroscuro brilliance.

Dafoe is brilliantly cast as Wake, William Blake his literary touchstone, a grizzled beard and rugged features bearing witness to an eternity of storms and baking sun. Hobbling about on a gammy leg, his countenance is that of stiff-necked superiority and he pulls rank at every opportunity over his junior Winslow, who bitterly resents every command, turning his gaze on the slowly revolving beam, mesmerised by its chiaroscuro shadow play. Wake insists on being “the keeper of the light,” but we are soon made aware of a curious sexual vide that also inhabits these close quarters. Both have a troubled past and a need for solitude so their enforced nearness is a constant thorn in the side of the other.

Seabirds are very much a motif here along with a recurring sequence where Winslow is sexually tormented by a mermaid. A contretemps with an angry seagull marks a change in the weather, bringing a freezing storm from the North East and ruining their food stocks, sending them straight to the bottle for sustenance, with alarming and ambiguous consequences. Clearly it will all end in tears, albeit very salty ones laced with rum. MT