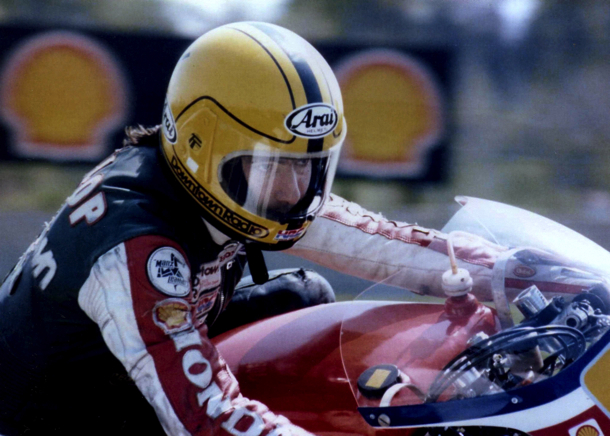 ROAD is a documentary about successful – but tragic – Northern Irish motorcycle racer brothers Joey and Robert Dunlop and Robert’s sons William and Michael, who are following in the footsteps of their father and uncle, both killed in their late forties whilst racing.

Narrated by Liam Neeson, this production is faithful to the events and the intricacies of this intrepid sport, but leaves too many questions unanswered. Joey (1952-2000) was eight years older than his brother Robert, who quite obviously hero-worshiped his older brother, who, was a five-times TT Formula One World champion and celebrity in Northern Ireland. The brothers grew up in Ballymoney, County Antrim, where road racing was very popular. Seeing the rather doleful landscape, the popularity of this dangerous sport seems obvious: racing on a motor cycle at 200 miles an hour makes you forget everything, the effect is much more powerful than a drug, and one understands somehow why the brothers continued racing into late middle age; whilst motor cycling, like most sports, is the prerogative of the young man.

The images of the landscape flying by – the camera fixed to the helmet of the driver – are intoxicating, but the danger is clearly underlined when one of the drivers crashes violently, and the screen suddenly turns black. This imminent danger of death has to be overcome by every driver, not only for the races themselves, but the countless practice runs (Robert Dunlop was killed during practice for the 2008 North West 200 Race). It takes a very special person to handle this pressure, particularly when racing for nearly three decades, as Joey and Robert Dunlop did.

In its reluctance to research anything substantive about the brothers, or at least trying to, lays the fundamental weakness of this film. We learn nothing about the society in which the Dunlop’s lived: politics, culture and religion are never mentioned. Considering the continuous tensions in Northern Ireland this is a stark omission. Family life is hardly mentioned, only in passing, and when related to the racing activities. But it is obvious, that the women of the clan had to bear the burden of the upheaval of racing and deaths. Whilst even Joey and Robert talk about their “selfishness” – the sport taking them away from their families – but the filmmakers never question this side of the biography. In concentrating nearly exclusively on their sporting achievements, they short-change the brothers and their sons. Whilst we see Michael and William forcefully getting into the starting line of the 2008 North West Race, only days after their father Robert was killed (they were both banned because of their emotional state, Michael would eventually win this race), we hear hardly anything about their feelings. And Joey’s charity work for Romanian orphans in the 80ies and 90ies, for which he was awarded the OBE in 1996, is mentioned like a footnote. But, we ask ourselves, why did he undertake these expeditions alone – again, why did he leave his family behind, why was he such a loner? The way the film is structured, we conclude that the Dunlop’s are either heroes or suicidal maniacs – both of which they are obviously not. Simply too much is left out for us to make up our minds – a shame, because they deserve that we know more about their tortured souls. AS

ROAD IS ON GENERAL RELEASE FROM 6TH JUNE 2014