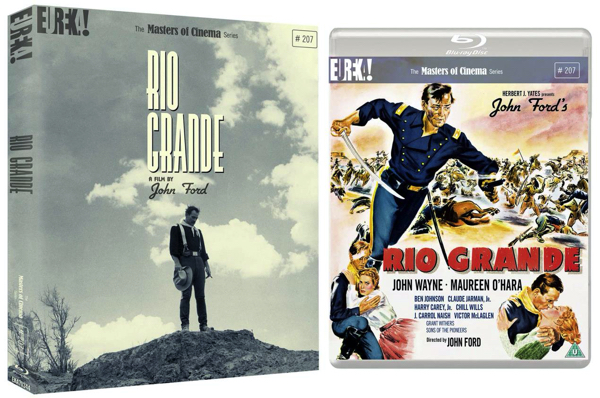 John Ford’s Rio Grande is the final part of the “cavalry” trilogy that started with Fort Apache and She Wore a Yellow Ribbon, and continues in the same vein: the Indians are dastardly, real men – when on the right side – are above the law, and women get to see what’s good for them, even if it takes them a long time.

Colonel Kirby Yorke (Wayne) is fighting the Indians at the titular river, but the cowards always decamp into Mexico when things get rough. And the high command allows him not to go in hot pursuit, since Mexico is a foreign country. Enter Jefferson Yorke, a son Kirby hasn’t seen for fifteen years. Jeff’ has just flunked West Point, but still wants to be a good soldier under Dad’s command. Hot on his heels comes mother Kathleen (O’Hara) – who has also has not seen Kirby since the latter burned down her family mansion during the Civil War. Kathleen wants to buy her son out of the army, but Jeff is hellbent on following Dad, and earning his spurs. Up comes trooper Tyree (Johnson), who is on the run for manslaughter, but is given a helping hand by the Colonel and his mates. Eventually, the Colonel finds a way to track the Indians down – even if it means breaking the law. But hell, if a certain Lt. General Sheridan is your best friend, you can take a chance or two.

Rio Grande now seems so dated, not only in look but also in theme. And there are many little ‘Trumps’ at work: misogynists for whom the law means nothing. The Indians are shown as a wild bunch who need to be killed lest they further endanger white women and children. The script by James Kevin McGuiness is as vapid as a plume of pipe-smoke, the downtime between fighting scenes filled with songs by the Sons of the Pioneers. DoP Bert Glennon (Stagecoach) does his best, but General Sheridan didn’t need to worry  (“I wonder what history will say about this”): all is now being revealed in the White House today. AS