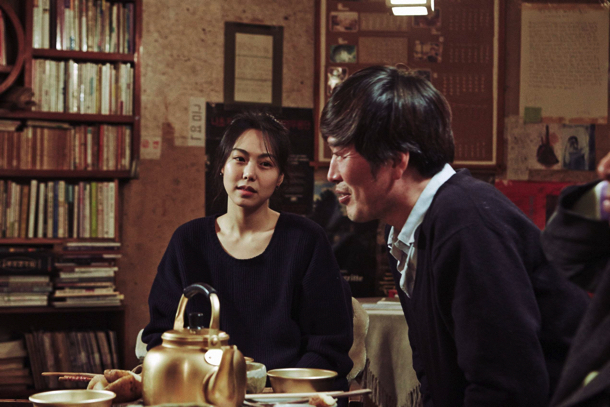 Korean auteur Hong Sang-soo’s makes slow-burning, sensitively-observed films about the intricacies of relationships between men and women, often meeting for the first time. There is plemty of dialogue embued with Korean humour, which is often similar to that of the English: situational, offbeat, dryly comic as with  In Another Country.

His latest – which won the   stars Jung Jae-young and Kim Minhee as a film director and budding artist  who meet up and spend a day together, on two simlar occasions. With In Another Country, Isabelle Huppert played three different versions of a French woman called Anne, engaging with one man, Here the two central characters play the same people and the narrative unfolds in two parts, roughly an hour each for the same meeting that varies subtly each time. As a piece of cinema, this is both unique and  fascinating as we experience the inner workings of each with their different nuances in the subconscious attitudes of the pair.

The film’s first half is called Right Then, Wrong Now and we meet the indie director Ham Chunsu (Jung Jae-young) who has arrived in a town near Seoul to take part in a Q&A disccusion after a screening of his film.  Due to scheduling issues, he gets there early and meets Yoon Heejung (Kim Minhee) who describes herself as “someone who paints” – in one of the town’s landmarks. After coffee and media-style banter, the pair become more intimate emotionally and Heejung admits she’s actually not a big film-goer and has never actually seen his work but knows his face and but has heard good things about hiim.  At this point he expresses a desire to get to know her better. They drift into meeting some of her friends in a bar and after a great deal of drinking, she disappears for a nap and he joins her, only to be told by her to leave. She heads home and her mother berates her for srinking too much. This section ends hilariously as he turns up hungover for the Q&A and ends up going over the top, taking offence at a remark from the moderator who he later calls a “prick” when he meets her again in Part Two (actually called Right Now, Wrong Then, like the actual film).

The day starts again but with some differences – rather lke a replay of In Another Country (except with the same charactes ) or Our Sunhi, where perceptions of the characters are skewed. In the second half, we see that subtle differences can alter the dynamic between the couple and how their reactions differ as a result. In part two, it emerges. that she has given up smoking and feels stressed as a result. His amorous advances also come for a different reason this time around and demonstrates how subtle nuances can make big changes in our perceptions in meeting people.

Cinematophgraphy here is bland and unremarkable and a very simple score occasionally punctures the scenes which are framed often with the two sitting together and then the camera focusing on each one individually before zooming out again.

Whether the pair will go on to be together all depends, as in real life, on their ego concerns and what they are looking for in a prospective partner.  Hangsang Soo shows how chemistry and attraction is only just a part of the relationship and how it proceeds and developes. MT