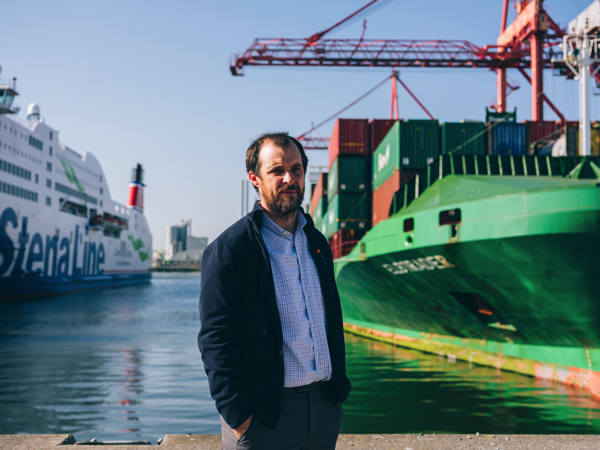 A father is forced to admit his true feelings in this thoughtfully filmed and acted drama from Peter Mackie Burns.

Based on Mark O’Halloran’s award-winning play ‘Trade” (penned before Ireland passed the marriage equality amendment in 2015) this Dublin-set story is full of loss and longing exploring a  gay awakening – there, I’ve given the main plot away – but that is the crux of the narrative. Career port official, Colm, 46,  is a pretty average bloke with a wife Claire (Dolan) and kids Kerry (Sophie Jo Wasson) and Shane (Scott Graham) when three unexpected events take over his humdrum existence.

First he loses his domineering father, then his job. Finally – in the gents loo at his workplace – he meets teenage rent boy Jay who will change his life forever. Tom Vaughan-Lawlor gives a quietly moving performance as Colm, a man whose life is blown apart by these surprising and devastating circumstances  – although the film never resorts to melodrama, completely the opposite, in fact. And that is its strength. The film’s weakness is its cinematic drabness, most of the action takes place in glum domestic interiors, despite an impressive widescreen opening shot (by DoP Adam Scarth) that sees Colm looking down from a container crane. The rest is downhill visually.

The theme of fathers and sons provides context to this rather mournful drama. To add to the complexity of the sexual developments, Jay has just had a baby with his 19-year-old girlfriend and is also on the breadline, so when he discovers Colm’s wallet in the lavatory cubicle, he heads straight over to his office and asks for money in exchange for keeping quiet. The pair are then hooked into a relationship of dependency – Colm needing sex, Jay money – and as Colm sinks into further into depression his life spirals out of control worsened by his loss of earning power, and a dependent family. Jay meanwhile struggles to adapt to new fatherhood.

Rialto is a decent and nuanced study of ordinary working class men  suddenly unable to cope with their emotional lives, it’s also quite a depressing film to watch and one that is instantly forgettable once the titles have rolled. MT

IN CINEMAS FROM FRIDAY 2 OCTOBER 2020