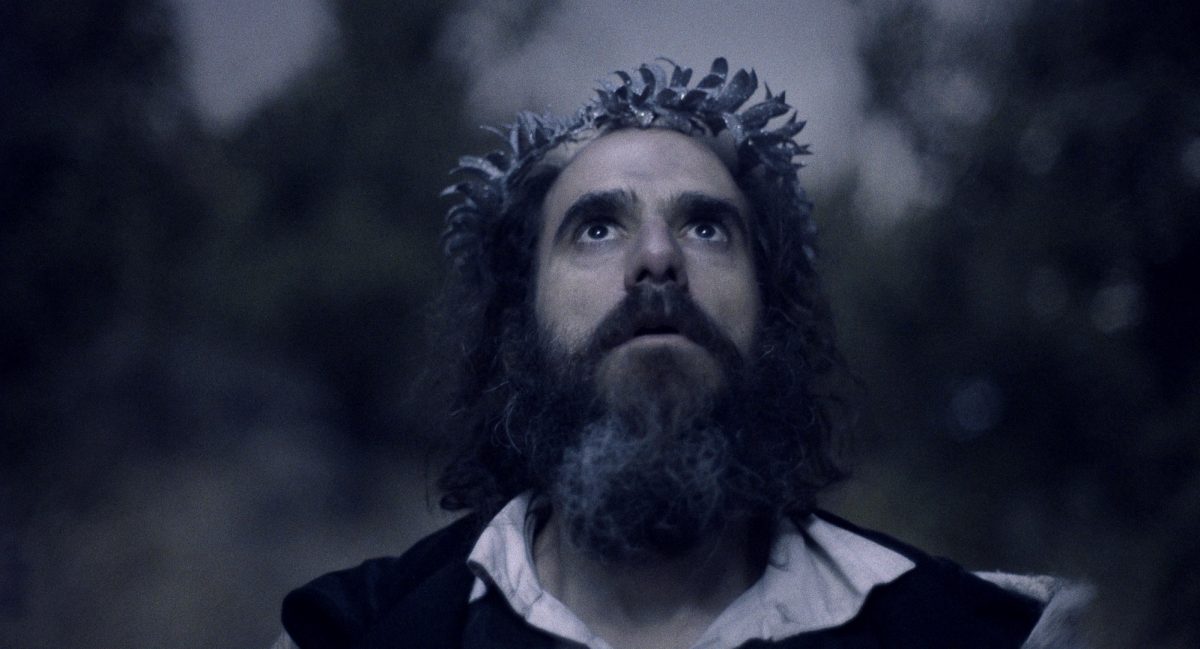 California-born, Chile-based Niles Atallah’s King (Rey) is a surreal imagined drama with roots in the largely forgotten history of Patagonia and based on the life of the French country lawyer Orélie-Antoine de Tounens (1825-1878), who travelled in 1860 to a remote part of southern Chile, where Mapuche Indians were in fierce battle for survival with Chilean military forces keen on expansion. Mapuche folklore told them to expect a white visitor who would help them  to unite their native Indian population in the region into the new Kingdom of Araucania and Patagonia, and so agreed to make him the hereditary monarch of this realm that is typically accepted as part of Chile and Argentina. The story of how far he got in realising his dreams is shrouded in mystery, but Atallah is not so much interested in facts, but in the mindset of the man who wanted to be King.

Told in five chapters and an epilogue, we first meet de Tounens (Lisboa) riding on horseback through the Patagonian wilderness, holding in his hand a self-made flag: the self-declared King is on the way to meet Mapuche chief Manil, to discuss the foundation of the kingdom. But Manil has died, and his son Quilipan, is not willing to meet Tounens, because he is a white man (winka) and the Gods would be angry if he stayed. Tounens is accompanied by the scout Rosales (Riveros), who soon betrays him to the Chilean authorities. Imprisoned, Tounens is put on trail; in the courtroom, everyone is wearing a mask. Tounens is accused of plotting the overthrow of the Chilean government with the help of France, supported by his fellow countrymen Lachaise and Desfontaines, who are “ministers’ in his cabinet. Threatened with the death penalty, Tounens is finally deported to France.

Atallah asks the question: why would a rather ordinary man from the Dordogne want to become the monarch of a wild region of South America? During his research, Atallah discovered how Tounens had promised the government in Paris a new colony, called “New France”, three times the size of the motherland, and full of mineral wealth. Yet to the director this is only part of the story, because nobody recorded the tale from the Mapuche’s perspective. Even today, along with the other indigenous inhabitants, the Mapuche don’t feel like being part of Chile or Argentina; they are discriminated against, and live in fear of the authorities.

Atallah has created the fictional aspect of history re-told in his own way: in 2011 he buried the film stock of 35mm, 16 mm and Super Eight in his garden, to see for himself what history does to film. Furthermore, he used stop-motion and puppetry in the deliriously feverish passages of his feature; on top, images are scratched and disfigured to give the feature the historic quality he was aiming for. Somehow reminiscent of the work of Guy Maddin, along with Eraserhead, Aguirre and Zama, Rey is inventively creative: a nightmare vision of history with a protagonist who created his own apocalypse. AS

PRINCE ANTOINE IV, the latest heir and pretender to the throne of Araucania and Patagonia died on December 16, 2017 aged 75.

ON RELEASE AT ARTHOUSE CINEMAS FROM 5 JANUARY 2017