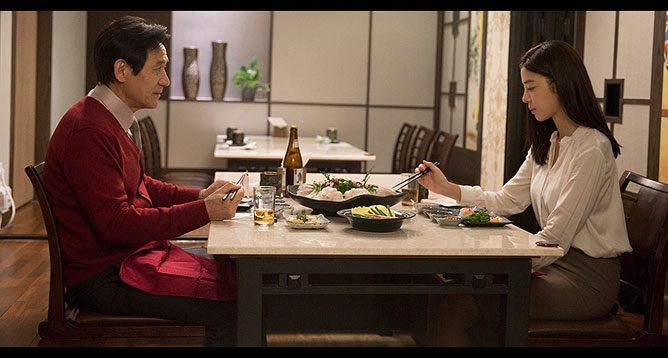 In his 102nd feature film REVIVRE, veteran South Korean director Im Kwon-taek tells the story of an ageing man caught between his duty to a dying wife and his lust for a young woman. Based on the short story “Hwajang” by Kim Hoon, the ambivalence played out in the film is explained by the double meaning of ‘Hwajang’ in translation: “putting on make-up” as well as “cremation”.

Mr. Oh (Sunki) is an advertising executive for a major company producing beauty products. In his mid-fifties, he lives a very unhappy life: His wife Jinkyung (Hojung) is dying of a brain tumour, and he is suffering from prostate trouble, causing him to visit a hospital on a regular basis, to have his bladder emptied. Further more, his job is very stressful, competitors and his own staff making his working life a living hell. No wonder therefore, that he is falling in love with the young Choo Eunjoo (Qyuri), a new employee in his department. We suspect that the latter might be taking advantage of the situation, when Oh is finding out, that his by now deceased wife knew along about his feelings for the young woman.

Set between the months of February and December, Hoon’s short story is very much told in internal monologues. Im Kwon-taek avoid voice-overs, which would have been an easy solution, and tries instead to focus the narrative on Oh, whose ambiguity dominates the proceedings. His relationship with his wife is typical: whilst he is looking after her in the hospital, even performing tasks for the nurses, it becomes clear in flash-backs that he never really loved her. He sees her, like his job, as a duty, which he performs as well as possible. The only events he really enjoys before Choo Eunjoo appears, are the long drinking dinner parties with his staff. Family and work life always collide: after the funeral of his wife, Oh’s house is full of family guests, but he prefers to tend to employees who need his authorisation for the forthcoming release of the summer collection. Whilst he makes one failed attempt to talk to Choo, he prefers to imagine making love to her. Mr. Oh is a lonely man indeed and he is going to realise this even more when he learns rather surprising facts about the woman of his dreams.

REVIVRE is an elegy, a melancholic portrait of an old man who has to come to terms with his own mortality and a life that from the outside might have looked a success, but was much more empty. In one short scene with his wife and her dog, we see how much more the dog means to her – the gulf between the couple was only camouflaged by the presence of their children and Oh’s long working hours. The camera follows him often mournfully; in long shots he seems to disappear into the background. Sunki’s Oh is very understated, he is played with great restraint and his inner hollowness is translated into a stooping walk and long gazes into a far-away world. Somehow he seems to be so lightweight that a wind could blow him away. REVIVRE is a convincing “trauerarbeit”. AS