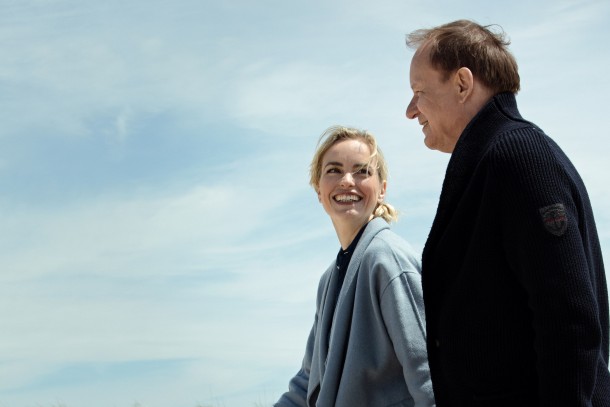 Nina Hoss and Stellan Skarsgard grace Volker Schlöndorff’s elegantly chilled cocktail of literary lives and romantic recidivism that premiered in at Berlinale several years ago, then disappeared before coming to Amazon Prime

Stellan Skarsgard is Max Korn, a seasoned writer who knows how to project romantic illusions of love in his relationships, but whose fame has taken him to a place of unreality, and who’s totally unaware of it. During his life, he has moved through a series of female conquests without really engaging with anyone. In New York to promote a book with his latest – much younger – partner (Susanne’s Woolf fawning ‘creative’ groupie), he reconnects, via a business associate (a sinister and alluring Niels Arestrup) with Nina Hoss’ glamorous Rebecca.

Rebecca is another brief fling from the past who appears aloof at Max’s reappearance, scarcely concealing a troubled secret behind her own sophisticated persona. These central characters make a fascinating couple – much in the style of After Midnight: Max is accessible yet empty inside; Rebecca’s outward frostiness conceals a romantic but disillusioned idealist . An impromptu trip to the tip of Long Island to view Rebecca’s putative holiday home is the catalyst for a tender eruption of feelings that flood back when she confesses her troubles to the now enraptured Max.

Shot on a handheld camera in the slick Manhattan venues and limpid platinum beaches of Montauk, on the tip of Long Island, this an engrossing and emotionally moving story of lost opportunities and dreams that asks the question: do we settle for the ordinary or the life less ordinary? MT