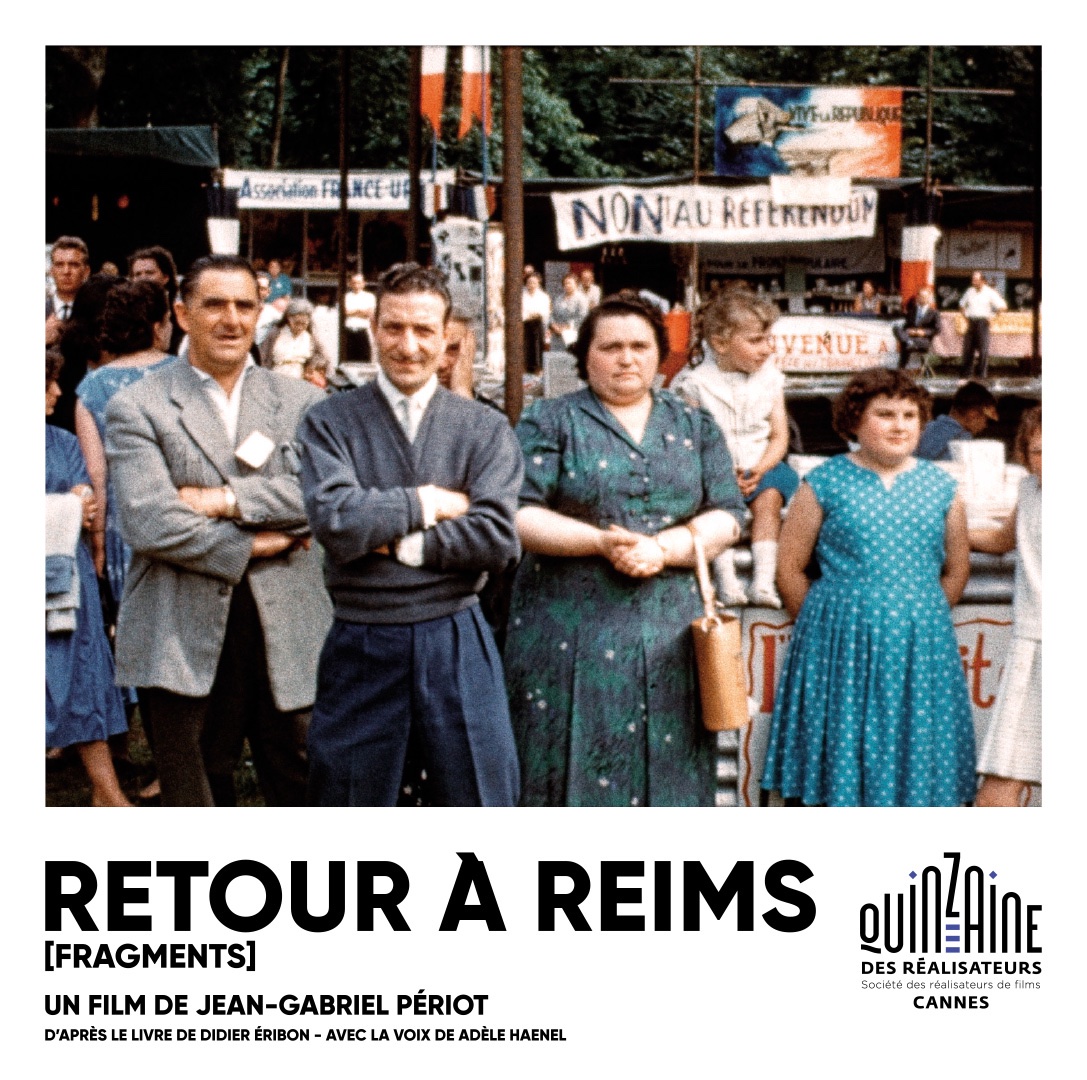 Adèle Haenel is the force behind this sober big screen essay film from French writer/director Jean-Gabriel Périot, based on the autobiography of philosopher and author Didier Eribon (*1953) Retour a Reims (2009) it works as a social and political commentary of the past 100 years.

Eribon is a controversial figure in French literary circles winning the prestigious Brudner Prize, which he later returned. Retour has also been adapted for the stage by Laurent Hatal in 2014.

Périot successfully avoids talking heads and instead overlays Adèle Haenel’s narration of the text with a 83-minute collection of French newsreel, documentary and feature film clips from the 20th century. As the camera slowly pans over a working class district of the city, Retour a Reims opens with a discourse on the family’s history, recounting how his grandfather, who died aged 54, kept it all going with to two jobs during the 1940s when the average live expectancy of manual workers was around 59. There then follows a long diatribe about a reconciliation with his mother, visiting her for the first time in 30 years, after the death of his homophobic father. “My hatred for him has been forged by the violence of the social world. His fate was determined by his upbringing. leaving school at fourteen like all working class kids of his generation. The powers that be knew that Culture was a corrupting force, controlled by the middle and upper classes, they were kept apart from the workers”.

An interview during the 1950s documents the power of this ruling ideology: “At work I can be free, in school we had to be quiet, but at work, we sing, talk and so on.” As in much of Europe, only the privileged entered higher education. Working class parents could not help their children with home work, they could not even, as one of the mother recalls tearfully, give the children fruit.

Eribon’s parents started their marriage in a single room without a bath. Their family was completed with two sons. In the 1950s illegal abortions were common, so some couples put their sex life on hold. After his mother’s insistence paid off, the family was given a two-bedroom apartment in one of the new estate on the city’s border. Later, his father was made redundant, and his wife was forced to work in the factory.  Traumatised by losing control of the earning power, he joined other men in the local bars near the factory gates to see if their wives were being faithful.

Most working class men had a privileged position in the family set-up: their wives managing the domestic routine often holding down part-time jobs as well as child and home care. Meanwhile the men were away for long hours of social life in the bars and fishing “to get peace from the noisy family life”. Eribon’s parents voted Communist during the 1950s and 60s. This was not so much a political project, but a reaction to the hardship of every-day life. “We don’t know what happy ness is, because we do not have it”.

The advance of the National Front of Jean-Marie Le Pen in the early 1970s, was fuelled by the deep-seated racism of the white working class. “A million unemployed means a million immigrants too many”. The replacement of the Communist Party of France by the NF as the main party of the French proletariat is mirrored in a scene from a feature film: in a bar full of French workers, a mixed race couple as accosted, the white woman called a “whore”. One of the workers has a grim message: “I would simply drop an A-bomb on Algiers”. Another one has a better solution:” No bombs. What we should do is put all immigrants onto planes, and then open the doors over the sea”.

Eribon “adopted the racism against the workers from North Africa”. After his mother ‘confessed’ to having voted NF, Didier told her “that Le Pen’s Party was against abortion rights”, but she went on complaining about the hordes of immigrant children.” They have to learn that these places here are not like the hovels they have back home”. After his parents moved away from the estates, her son comes to the conclusion that “the NF is the last bastion of the working class to preserve the identity against those politicians from the right and left, who have trampled on it.” And “My mother’s racism was a compensation for her own repression, so that she could feel superior to those even worse off than herself.” But isn’t the stance of the disenfranchised? The outlook, according to Eribon, is not rosy; somebone painting a slogan on a shop window after the 2017 election “Macron 2017, Le Pen 2022”.

What makes Retour so fascinating is the mixture of personal memory and historical research. Somehow, the author’s guilt at becoming a “class traitor”, seeps below the surface of his studied distance. But most intriguing is the parallel rail of film and commentary: the seventh art as a witness of history. Brilliant. AS