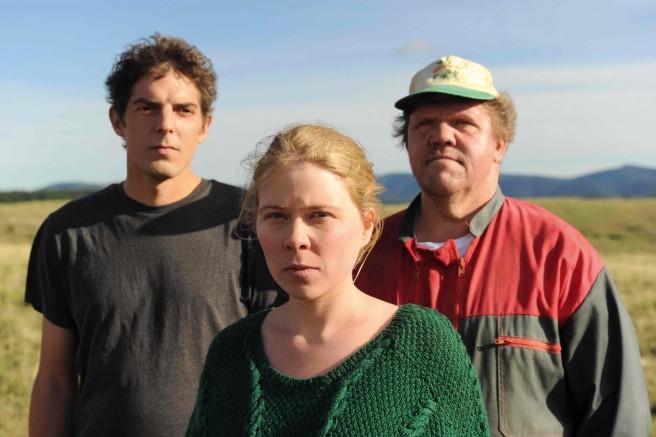 After winning Best Director in Cannes Festival’s Un Certain Regard sidebar in 2013, for his intriguing thriller Stranger By the Lake, Alain Guiraudie is back in the main competition line-up with another eventful drama entitled STAYING VERTICAL which is set in the wild and wolf-inhabited plateaux of the Southern Massif Central and shares the same dark and absurdist humour as his 2009 outing The King of Escape.

STAYING VERTICAL is also similarly charming and queer oddity, in bost senses of the word that follows its dorkish but likeable hero Leo (Damien Bonnard) an itinerant screenwriter who chances upon a single-mother and shepherd Marie (India Hair), while researching his writing. What starts as a bucolic love story in the farm she shares with her father, the rough-handed ogre-like Jean-Louis (Raphael Thiry), leads to the two fathering a child but Marie soon leaves for pastures new when she realises Leo has no future, leaving her with the baby.

Leo feels fulfilled with this outcome but Guiraudie has more quirky surprises in store for us in the shape of a strange local couple, Yoan (Basile Meilleurat) who he tries to invite for an audition on account of his wolfish looks – and a crabby old man, Marcel (Christian Bouillette), who seems obsessed with talking about anal sex. There’s a feeling that Leo is bisexual but this seems an option he’s prepared to explore rather than a serious predilection. However, he does draw the line when approached by Marie’s father more from the associative perspective rather than the sexual one. And this power of suggestion seeps through Guiraudie’s narrative for most of the film’s modest running time providing both a rich and seductive vein of dark humour and a ruminative meditation for the audience. As in The King of Hearts, all the male characters here share an amorphous sexuality which is both appealing and freaky due to their associative and binding ties, as they are all fathers or father figures.

Despite its tonal uneveness, Guiraudie’s film contains some powerful political and societal themes. There are moments of wild beauty in the winding roads and bleak hillsides of this unexplored part of France and to reflect this remoteness, Guiraudie occasionally wanders into poetic scenes where Leo visits an alternative healer (Laure Calamy) and shocking ones where he is robbed by the same homeless people who he has helped during his visit to a nearby port. The theme of wolves recurs again and again throughout the film.  At first, they ravage the sheep including Marie’s treasured sheepdog and they appear again at the end of the film bringing a satisfying feeling of closure and a chance for redemption for Leo, who up to now emerges as somewhat of a loser, albeit a kind-hearted one, representing a feeling that men are the lost lambs of contempo society: in their quest to be connected with their emotions, they have ceased to fulfill their expectations as the strong protectors of the fold. MT