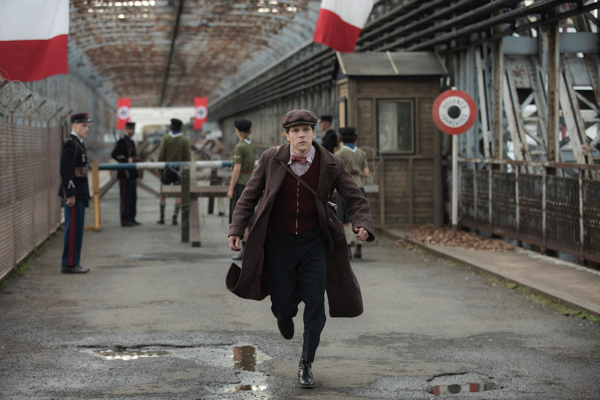 Hollywood and Holocaust are often poor bedfellows: One hugging the duvet the other suffering in silence, as in this biopic on Jewish hero and mime legend Marcel Marceau, that gives centre stage to the infamous Klaus Barbie who already hogged the limelight in Max Ophuls’ definitive documentary Hotel Terminus. Barbie may provide the stuff of melodramas but here the focus should have been Marceau.

Venezuelan born filmmaker Jonathan Jacubowicz (Hands of Stone) bills this son of a Jewish butcher, who started life in Strasbourg as Marcel Mangel, as a ‘Piped Piper of Hamlyn’ figure who played a significant role in smuggling Jewish kids to safety. The director has clearly done his homework in a script informed by Marceau’s cousin Georges Loinger (Geza Röhrig). The result is Life is Beautiful meets Inglorious Basterds: once again the Hollywood playbook wins the day.

The film joins young Mangel just before War breaks out, he’s running the shop with his father (Markovics) and keen to marry French resistance worker Emma (Poesy) impressed by her knowledge of Freud and attempts to smuggle Jewish orphans into Switzerland. Joined by his  brother Alain (Moati), cousin Georges and his girl-friend Mila (Kerekes) Mangel soon discovers his gift for mime, communicating silently with the children, one is Elsbeth (Ramsey) traumatised by the brutal murder of her parents in the “Kristall Nacht” pogrom of November 1938, pictured in the opening sequence. Once the Germans occupy France, the group moves on to Limoges, then Lyon where Mangel takes up forgery changing his ID documents to Marceau, and comes up against the Gestapo, led by the infamous Klaus Barbie, the “butcher of Lyon” who soon imprisons Emma and Mila in the city’s Hotel Terminus that has become his private torture chamber After Marcel’s father is deported Auschwitz, the film culminates in a “great escape” of sorts.

DoP Miguel I. Littin-Menz sets this on a grandiose scale with breathtaking panorama shots and intimate close-ups of Klaus Barbie and his young family, upstaging Marcel and his troupe who feel like pale riders in comparison. A terrible quote from Anna Karenina forms the backdrop to one eerie scene round the hotel’s empty swimming pool. Despite his idiosyncratic talent for facial subtlety, mime is clearly not Eisenberg’s metier but he makes for a compelling He relies on his spoken language, but makes for a thoughtful Marceau. With a running time not warranted by the narrative, Resistance is certainly revealing, but fails on the finer points: the Shoah was not a colourful spectacle – we shouldn’t honour the dead by giving so much time and attention to the murderers.