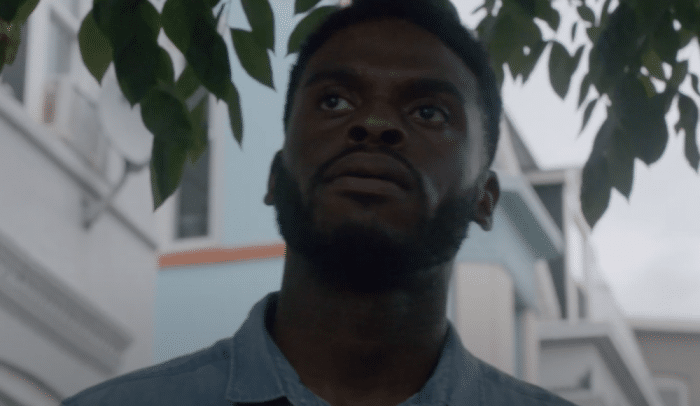 This debut feature chimes with today’s Black Lives Matter theme
through the Merawi Gerima’s personal homecoming memoirs seen through the eyes of through of his main character Jay (Nwachkwa, also a debutant).

Jay is back From studying film in Los Angeles. But his old stamping ground of Washington DC: once called Eckington, now NoMa (North Massachusetts Avenue), doesn’t feel the same anymore. Gentrification has since set in. But although Gerima is keen to point out that his film is not about gentrification, it is hard to interpret otherwise.

Jay’s parents (Ramon Thompson/Melody Tally) are hassled by property developers, and his childhood friends are seemingly hostile. The parallel sequences of his happy boyhood are truly nostalgic, and ring sometimes much truer than the contemporary alienation narrative.

Jay’s parents have always been a touchstone for the troubled youth of the area, and these issues continue to abound along with unsolved drug problems and new confrontations with the White interlopers. Of Jay’s childhood friends, Mike is dead; Dion (Graham), his former older idol (Jacari Dye plays a young Jay) is in prison; and Demitrius is nowhere to be found. Delonte (Lindsay) is one of many indifferent to Demetrius: “He moved to Maryland, I think”, he tells Jay. But Delonte had his own family issues to deal with, including the death of his mother at the hands of his father, Jay is a traitor: “Don’t forget, you left us! You can’t save me now. You lived the big life in LA, whilst we held down the city. Don’t ask ‘where is Demitrius, as if you really care. You only care only about yourself and the motherf…g movie you are shooting. Anyhow, we are paved over by the Whites, like we never existed”.

Jay’s relationship with his girl friend Blue (Stewart) is also troubled. She feels rightly neglected and, after a party, a jealous Jay storms off when he sees Blue consorting with his mates. The most impressive scene is Jay’s prison visit for Dion, whose letters he had never answered. Instead of the depressing penitentiary background, Gerima stages their meeting in the woods of their childhood. This is much more intense than the staged titular scene, where a White woman’s dog craps on the Black home owner’s lawn. While the dog’s owner is cleaning up, the house owner complains “about leaving residue on my lawn”.

With the riddle of Demetrius unsolved we are left with Jay’s partly irrational anger about changes: he has lost his childhood friends and environment and struggles to replace them. The filmmaker and his main protagonists seem to have hit a wall.

Impressive camerawork by DoP Mark Jeevaratnam cannot make up for a narrative that leaves too much unresolved. A more structured approach would have helped greatly. Nevertheless, Residue is strong on intensity and benefits from convincing performances from both the younger and older Jay. AS