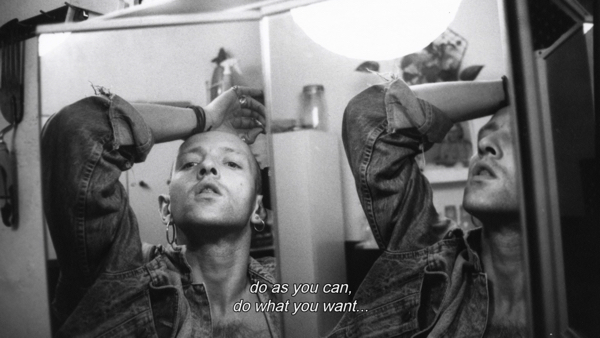 Berlin’s Gay Scene at the end of the 20th Century provides the backdrop to this revealing biopic about painter, photographer and gay activist Jürgen Baldiga (1959-1993). Rescue the Fire is a thoughtful first film from writer director Jasco Vifhues. It recalls the time when the Aids/HIV epidemic was taking a grim toll, German government cuts making things worse. .

Visiting the ‘Schwules Museum Berlin’, Baldiga’s surviving friends present archive material of his work. These also link up with the directors and festival organisers of the Berlinale of that era. Baldiga was working as a photographer at that time and took photos of Derek Jarman, Wim Wenders and Dolveig Dommartin among others. He was also a friend of the first Panorama director Manfred Salzgeber, and his Wieland Speck who took over when her died of AIDS.

Growing up in the Westphalian town of Essen, Baldiga arrived in Berlin in 1987. He developed from a mere ‘snap-shot’ amateur to become a professional photographer. During the ‘Tunten’ scene in Berlin, he apposed Government cuts which were having a punitive affect on the gay community at a time when Aids/HIV was rife. A laudable exception to the negative face of authority was Anne Momper, wife of the West Berlin mayor, who joined the HIV infected in the public bath in Krumme Strasse, racing them in a competition.

Baldiga celebrated his 31st birthday at a demonstration to abolish the infamous law number 175, which criminalised all homosexuals. But by then he was already infected; his answer was “to live faster, more intensively”. The filmmaker Michael Brynntrup remembers his collaboration with Baldiga, who not only took stills but shot some scenes on 35mm. The rest of the short film was in 16mm. In Pioneer Seriös two men wrestle in the bath, one covered in yellow paint, the other in blue. Brynntrup remembers he had difficulties asking the actors to proceed, but Baldiga had no such problems: “The camera was his proverbial rabbit – just the opposite of me”. Baldiga focused on his bodily changes. Being ‘positive’ meant much time was spent finding the right doctors, avoiding getting colds and other infections. And: “Educate, don’t hide”.

For many years, he also wrote a diary, which he bequeathed to his friend Aron Neubert: “I know, your hands will keep them well. Take the photos and put some of commentaries from the diaries next to them.” In 1991 Baldiga was hospitalised with pneumonia. But he still posed in drag as Louise Brooks. His wig went up in smoke, after he leaned too close to the spotlight. He also went to extremes, showing the horror of the Karposi Sarcomas on his legs. He had his first Sarkoma cut out and put in a box with ornaments like a relic. The more his body disintegrated the more he yearned for something physical. From the attractive poster boy of the gay scene, “I have deteriorated to something decrepit, ugly, a shrivelling and dying person”.

But he was not alone, his good friend Melitta went to the hospital and died inside thirty minutes. That was Baldiga’s dream death, he took all the medicine and morphine (his friends had in vain tried to hide the from him) and fell into a coma, from which he never recovered. He instructed one of them to take a last photo of him “ICH BIN TOT (I am dead), Jürgen Baldiga 4.12.1993. I loved 4000 men, in the end the fabulous Ulf.” Then there is one of his last photos, where he eats ice cream with a morphine drip in his arm, subtitled “Isn’t life great?” But for most of his last year, he ‘was often lonely in his thoughts’.

Rescue the Fire is a not an easy documentary because Baldiga’s friends followed his advice, and told all. In the end this a long ‘Trauerarbeit’, with evocative images by DoP Hendrik Reichel. Those who who witnessed the era will never be the same again. Too much was lost well before time. AS