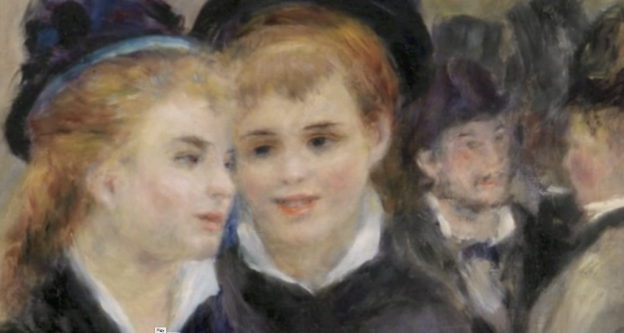 Phil Grabsky brings together the contrasting elements of the work and life of Pierre-Auguste Renoir (1841-1919), an early Impressionist painter who later turned his back on the movement he helped to establish – and the American millionaire who obsessively collected his work, Albert C Barnes.

Superbly photographed by David Bickerstaff at the Barnes Foundation in Philadelphia where part of the documentary is set; we learn how tailor’s son, Pierre August Renoir admired Manet and Corbet as a young man and instead of joining his friends for lunch, he visited the Louvre; rather like Sisley, Monet, Pisarro and Degas, who “learned more from their visits to the museum than at art school”. The group, and particularly Renoir, owed their living mainly to the art dealer Paul Durande-Ruel, who acquired over 1500 paintings of the father of the future filmmaker Jean Renoir. The art dealer in turn sold nearly 181 of these to Albert C. Barnes, founder of the Art Collection in Philadelphia. All these paintings at the Barnes Foundation are post 1880, a time when Renoir broke with the Impressionist movement after a visit to Rome, where he decided to give “up spontaneity in favour of something more solid”, the watershed being “Luncheon of the Boating Party” (1880/81), where on of the revellers was his future wife Aline Victorine Charigot, whom he married in 1890.

But after a few years, Renoir would return to a more expressionistic form, as in “Grandes Baigneuses (1897). Five years later, the painter developed rheumatoid arthritis, which in the end forced him to employ helpers, after he moved to the villa “Les Collettes” in Cagnes-sur-Mer at the French Riviera in 1907. During WWI, two of his sons were wounded, and his wife died of cancer. But his paintings, admired by Picasso and Matisse – the latter, who also moved to the South, visited Renoir at to show the older man his work – did not reflect the turmoil of war or his family life, instead he continued to paint serene portraits of mostly naked women in nature, such as “After the Bath” (1910). He was a prolific painter of the female body, which he often depicted as being passive and available.. His comments are, unfortunately equally misogynist (“Women should not think too much”), and critics called the women in his paintings “brainless and porcine, just available for men”. In one of his paintings, he showed two well-off men, flirting with young women, who were obviously financially worse off than them – a critic denouncing Renoir “because these women would become mistresses, not wives.” But Renoir, for whom the female body equalled nature, hoped that his paintings would be properly judged by future generations: “They will take fifty years to settle”.

The documentary suffers sometimes from too many talking heads and the long sequences of visitors at the Barnes Foundation, discussing rather banal aspects of the paintings, do not help either. But it captures the moment when is the moment when art history was in the making: Renoir’s ”The Artist’s Family” is x-rayed, to prove that Renoir over-painted a part of the picture, where he himself was standing with his wife and three children (among the future director Jean Renoir with an extravagant hat). Alas, no proof was found. The most moving aspect of the doc is the depiction of an older man still practising his skills despite his debilitating. While academic, Grabsky’s documentary offers a fascinating look at Renoir’s work, allowing the viewer insight into the Banes Foundation’s extensive collection. AS

OUT ON RELEASE AT SELECTED CINEMAS FROM 16 February 2016. See the film here