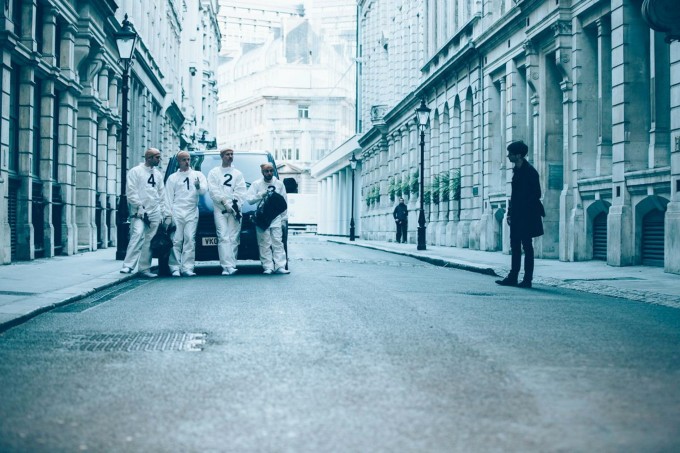 Well known for his video installations, REMAINDER is Israel-born filmmaker Omer Fast’s first full-length feature after his debut with the medium length hybrid documentary/fiction Everything that Rise must Converge. Based on the novel by Tom McCarthy, the obtuse drama deals with the function of human memory, and is difficult to classify.

Tom (Sturridge), loses his memory after being hit by a big black box falling from a highrise office block in central London. He spends the rest of this film trying to reconstruct his life before the accident. After receiving an £8 million settlement, he buys an old-fashioned mansion block, where he believed he had lived before. He then employs all the tenants to act out his memories. Two men, supposedly agents from the Security Services, kill a man with whom Tom was in contact, near a phone box out side his flat. The mysterious Catherine (Jumbo) visits him and he has her repeat some dialogue from their past. With the help of the equally enigmatic Naz (Ali), who is supposed to be an architect, Tom assembles a crew in order to restage a bank robbery in a private City bank, where Catherine works. When the restaging turns real, Tom feels as if he is caught in an endless time loop.

REMAINDER is well crafted on all levels, but lacks any emotional interest for the audience. We are tossed a few red herrings about Tom’s past but he remains a cypher along with the other protagonists in this guessing game exercise: Fast plays with the audience, but he does not engage for a moment. DoP Lukas Strebel’s images are fittingly cold and ascetic creating an atmosphere of enigma, where the protagonists float rhythmically in this soulless operation that fails to connect on any level. AS