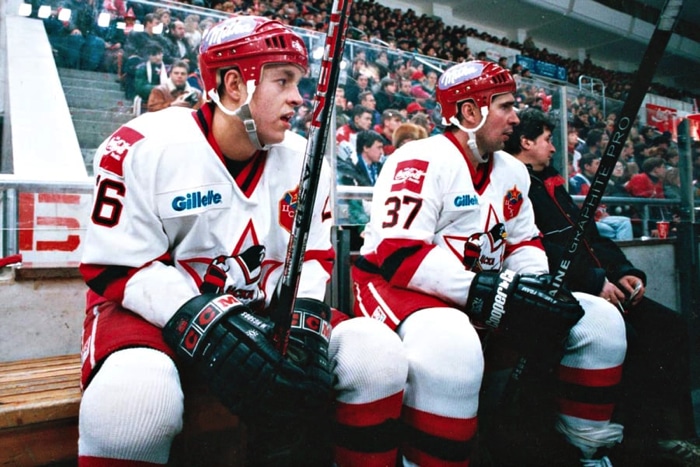 Russian émigré Gabe Polsky (Red Army), now working from the USA, offers a cautionary tale about a time when Russian hopes were high after the fall of Stalinism, and US entrepreneurs believed that doing business with their newly liberated partners would be easy and profitable.

Nothing could be more from the truth – as it turned out. Directing, writing and producing this remarkable and hilarious true story Polsky spills the beans about the “Red Penguins”, a Russian ice hockey team taken over by American financiers. If you remember, in his previous outing Red Army, the key to Russian success lay in ‘working as a team’. Read on.

The film kicks off with the two owners of the NHL (National Hockey League) team Pittsburgh Penguins, Tom Ruta and Howard Baldwin, who were in charge between 1991 and 1997. Back in the early 1990s, many world class ice-hockey players of the former USSR were snapped up by NHL teams. Meanwhile, the sport itself, like nearly everything in Russia, was in the doldrums. Finding investment was the easy bit – Michael J. Fox soon signed up and agreed to finance a takeover of the old Soviet Army team by American owners.

What happened next is told mainly by Steven Warshaw, who was the ‘Red Penguin’s’ Marketing Executive Vice President. He was appalled by the parlous state of the famous “Ice Palace” arena which was anything but palatial: the executive boxes were full of homeless people; the Plexiglas round the rink was splintered – and in the basement there was a strip club.

Alexander Lyubimow, a famous TV journalist, introduced Warshaw and his team to old hands like general manager Victor Gushin who wanted to help with the rebuilding of the once famous crew. But marketing whizkid Warshaw and the US investment team saw the operation less as a sporting venue, more as a marketing opportunity to transform the team into the greatest show in Moscow.

The ladies from the basement were confined to cages where they entertained the crowd by ‘stripping off’. New outfits and logos (smiling Penguins) were rolled out on TV, and finally coach Victor Gusev brought together a team which was at least presentable. But the girls weren’t the only ‘come on’. Bears dressed up as waiters serving ice cold beer to the over-excited punters, and one of the players actually lost part of his finger – clearly the bear was not amused by his antics. But young people loved the circus atmosphere, and advertising did the rest.

Meanwhile back in the USA, Disney became interested in the project, Michael Eisner planning a marriage of Mickey Mouse with the Russian ice hockey team (he later denied contact with the “Red Penguin’s” team). But when Russia fell into chaos after President Yeltsin bombed his own parliament, the collaboration naturally fell apart. Steven and his co-workers were called in to see the Minister of Defence, Alexander Baranovsky, former head of the CSKA sport club, and this meeting confirmed who was really in charge.

On 1994, the owners then took the team on a tour in the USA, but the results were very disappointing. Back in Russia, the Mafia was responsible for 40% of the GDP. Camouflaged as taxmen, they also approached Warshaw who claimed “they were ready for them to steal several hundred dollars, but they took a million.” It was all a little bit like the feature film Sudden Death, shot in the Pittsburgh home of the original Penguins, where a whole crowd is taken hostage.

The fate of the endeavour was finally sealed when Disney cut all ties, Five people involved in the operation were brutally murdered: the team photographer, one of the players, the assistant head coach, a Russian Hockey Federation employee and one of the most high profile personalities of the era TV journalist Vladislav Listyev (who was shot dead on March, 1st, 1995). Warshaw got away with a damaged thyroid.

The film plays out as a farce, DoP Alexey Elagin giving the narrative development a jerky intensity with his handheld camerawork. Polsky later laments Putin’s steady rise to power, as a helpless Yeltsin stood on the sidelines. Red Penguins is a masterclass in power-grabbing, highlighting a moment in history when the Kremlin and the KGB took the opportunity to manoeuvre themselves into the seat of power. Capitalism, bribery and murder was all part and parcel of the new order. AS