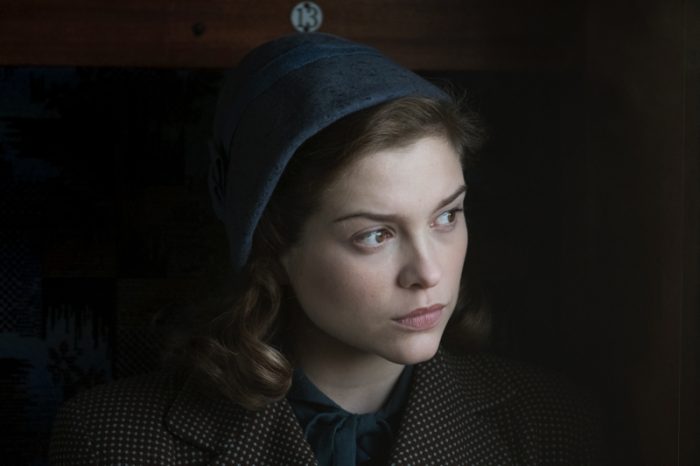 Best known for his theatre work, Trevor Nunn tackles a meaty wartime spy thriller set in the present day, and adapted from a novel by Jennie Rooney. Old-fashioned but thoroughly enjoyable, Red Joan tells the story of real life KGB operative Melita Norwood, a sensational Judi Dench, with an enigmatic Sophie Cookson playing her younger self.

Norwood who was finally arrested in her eighties, starts out at a physics student in 1930s Cambridge. Nunn’s construct of parallel action between a five-day interrogation by MI5 in 2000 and the past works seamlessly, leaving the audience time to reflect.

Joan Stanley (Cookson) is a rather timid and over-adjusted student, but after meeting German immigrants Sonia (Srbova) and and her handsome cousin Leo (Hughes), she is drawn into the world of communist sympathisers – mainly because she has fallen in love with the tousle-haired Leo. She is critical of Leo’s absolute subordination to the Stalinist dogma, but she is on “his side” – after all, the Soviet Union was an ally of Britain and the USA. During the war Joan is recruited into a highly secret project: Britain’s attempt of building the atomic bomb. Whilst Leo and Sonia, working undercover for the KGB, are pestering her to reveal secrets to them, Joan resists, and falls in love with the head of the project, a married Max Davis (a convincing Campbell-Moore). Max, gallantly, refused to have an affair with Joan, and wants to wait for a divorce. This throws Joan back to Leo, and she starts to give him photographed copies of he research documents. During a search of the laboratory, Kierl (Boxer) based on the real life life spy Klaus Fuchs, is caught; whilst the officer searching Joan’s bag is too embarrassed to go further after finding her (deliberately placed) sanitary towels. William Mitchell (Gaminara), who will later make a career in the Foreign Officer and leads MI5 to Joan, is another one of the ring. There are personal secrets to be discovered, like the real relationship between Leo and Sonia, and finally Joan admits all to Max, who is wrongfully accused of being a spy. His reaction will alter Joan’s life for good.

DoP Jack Nicholson and PD Christina Casali have combined in creating a picture perfect Cambridge in the 1930s and the world of laboratories and secret hiding places. Nunn always directs with great nuance – never straying into melodrama or cliché: Joan’s inner life is enough to go by. The overall message is of romantic intrigue, a turmoil of souls and an entanglement into history, not so much by choice, but by circumstance.

Dench brings out Joan humanity, she is neither a hero nor a villain: just an ordinary woman influenced by personal experience – rather than dogma – and an emotional yearning to belong. The Hiroshima and Nagasaki bombs (seen in archive footage) finally push her over the edge, but so does the death of her beloved father. Growing up in a man’s world, she is diminished and demoted to a tea lady (in spite of her first class degree in physics). Nunn shows her at the coalface of men’s emotional immaturity, bulldozing their way forward – whatever the ideology or the workplace. Her barrister son Nick (Miles) is ready to decry her, questioning her motives for a while. But Joan explains how convinced she was back then of ensuring peace by creating nuclear deterrence between the superpowers, placing a bomb in both their hands. To her it seemed the most logical solution. And Joan’s actions emerge a triumph of emotional individualism over (any) form of male inspired nationalism or ideology. AS