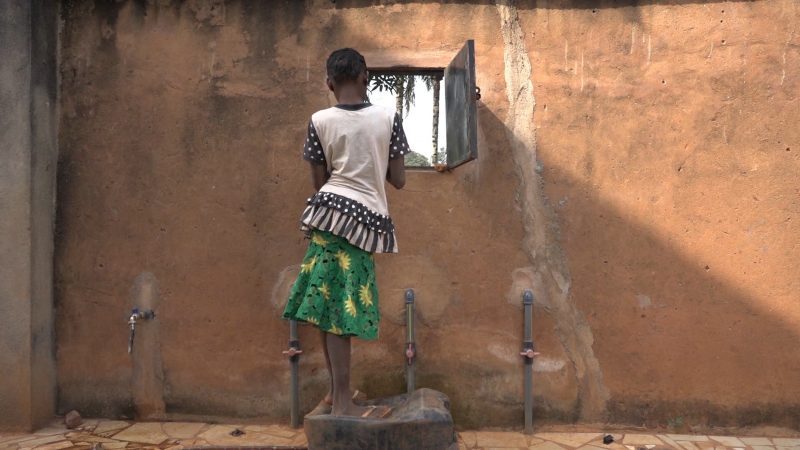 Christine Moderbacher serves as her own DoP in this insightful debut feature that explores her change of attitude towards the Christian missionaries at work in the Eastern Nigerian village of Nkwumeatu.

Red Earth, White Snow (Rote Erde Weisser Schnee) is very much as journey into the past. Civil war was raging when she first went to Nigeria during the late Sixties. And things have clearly moved on. But Moderbacher has changed too and is longer that God-fearing little girls she used to be. Back in the village with her father Joseph, and his Catholic helpers, the intention is to help with the harvest. But she is faced with nagging  questions about herself and the role of the Austrian Catholics, who still see themselves as saviours, sent by God.

Joseph Moderbacher might be ageing, but he he still has the drive and optimism of he had during the Civil War when Biafra split from Nigeria for a time. But all is not well: during this time in the adopted village of his Catholic crew he really starts to feel his limitations. The tractor they need for the harvest, has broken down, and Joseph and his college Alois are unable to get it going again. Moderbacher senior is, however, the star of the show: the villagers and Sabinus, the priest, pay homage to him. Daughter Christine compares past and present and nails down the common factor between Blacks and Whites: under the guidance of a Male God, Nigerian and Austrian men cooperate to repress females, making them into second class citizens. White women are patronized, black women are treated like slaves. Catholic ideology helps to keep the status quo. The clips from the Civil War are still traumatic: so much violence, and the helplessness of the ‘civilised’ nations.

The director questions past and present: the role of a Christian ideology, which so clearly segregates race and sex now feels outdated in its ability to promote change and still offer hope and salvation. Male chauvinism is still the dominating factor. And the need to re-examine the mythos of Christian volunteer work, when Moderbacher sen. and his friends are skiing in the Austrian mountains, where they  are “so near to God”.

There are structural questions, but Moderbacher’s approach helps to lift the hypocritical cover from the Good Samaritans, who are celebrating not equality but an exercise in superiority. A sharp irony permeates the whole feature, deconstructing and re-assessing the real motivations behind do-gooders or all kinds.