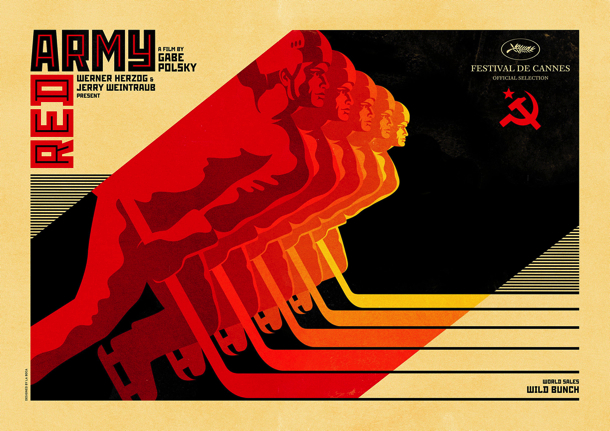 An intriguing film about the close relationship between sport and nationalism, RED ARMY is centred around interviews with Viacheslav Fetisov, once the world’s most feared ice hockey defender in the world-dominating USSR ice-hockey team of the 70s and 80s. He later became Russian Sports Minister under Putin between 2002 and 2008.

Showing clips from famous games, particularly the “Miracle on Ice”, when the USA beat the favourite USSR team at the Lake Placid Winter Olympics in February 1980, to win the Gold Medal, RED ARMY brings back the feverish atmosphere of the Cold War when every sport event was a competition of life and death for the main participants, USSR and USA. Whilst the Soviets were very honest about proving the superiority of their system with goals, the USA commentary after the Lake Placid game proves that the western leaders thought in the same category: a coach phoning President Carter after the game, proclaims relief and states “that we now can go on living our way of life”. The irony being that Soviet sportsmen and -women were surveyed by special KGB agents to prevent defection; one of the ex-officers being very open about their strategy in an interview in the film.

The documentary is also the tale of two Soviet hockey coaches: Anatoli Tarasov (1918-1995) and his successor Victor Tikhonov. Tarasov saw ice hockey as a form of chess, collaborating with chess players of his homeland. He literally wanted to create “Bolshoi on ice”, but fell out of favour after he stopped a game of his “CSKA Moscow Army” team – of which he was the coach too – because he disagreed with the referee. Brezhnev was in the crowd, and Tarasov was fired; to be replaced by the brutal and heartless Victor Tikhonov, who, not surprisingly, refused to be interviewed by the filmmakers. Tikhonov had his team in barracks for eleven months of the year, with just one phone to communicate with the outside world. He denied one of his players to see his dying father, and the joke among the team was “if you need a heart transplant, choose Tikhonov’s organ, because it has never been used”.

In the late 80s, just before the collapse of the USSR, some star players went to play for the NHL (National Hockey League) in the USA and Canada. The state took most of their six-figure salaries, but Fetisov did not wanted to share, and was ostracized by the authorities. He was not allowed to practice. Only his old coach, Tarasov, stood by him and assisted his training. Finally, after a confrontation with the then Defence Secretary Yazov (whose failed coup led to the demise of the USSR), Fetisov, went to the USA and claimed his full salary. He was one the few successes, many of the ex-USSR players were too old to adjust to the more brutal and simplistic play in the NHL,whilst Fetisov would win two “Stanley Cups” (championships) with the “Detroit Red Wings”. Their coach encourages the Russian players to perform in the style of Tarasov, partly re-creating the best ever out field-team of Fetisov, Kastanonov, Makarov, Krutov and Lariona.

The only remaining question here is why would Fetisov and other players return to Russia to serve in high positions, and be governed by Putin’s ex-KGB men who had repressed them in their playing days? Fetisov’s answer is straightforward: whilst in Detroit, the wives and families of the American players would ostracize his wife and child. Fetisov and others felt like unwelcome strangers; just mercenaries hired to win games.

The Motel Life Director Gabe Polsky, a hockey player himself, here offers an informative and absorbing portrait of a sportsman turned politician, straddling his life between two, perhaps not so much different eras, dictated by nationalist pride. AS