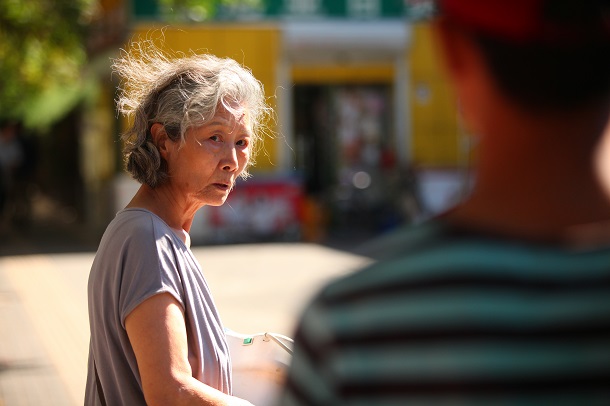 China’s past weighs heavily on the characters of Red Amnesia, Wang Xiaoshuai’s slow burning family drama that carries a quiet, subtle, but combative denouncement of the country’s treatment of recent history. This is a ghost story that unearths pains of the past that leading to tragic consequences, a thoughtful allegory of China’s contemporary relationship with its cultural revolution and, unquestionably, Tiananmen Square protests and beyond.

In a dearth of leading female performances at this year’s Lido, Lü Zhong is a top bet for a Best Actress win at the end-of-festival awards. At 73, she is tremendous as Deng, a lively grandmother who herself cares for her ageing mother, while being barked around by her affluent children who symbolise a faceless notion of China’s new rich. There’s something of Ang Lee’s early comedy of manners in the opening sections of the film, but the film turns out to be more politically minded and challenging.

Deng begins receiving anonymous phone calls in which nobody replies. Her kids think she’s dreaming, and she herself begins to have vivid nightmares of her own situation. Lü’s performance is just poised enough to suggest that she may or may not be losing her mind, especially when she starts talking to her recently deceased husband, even laying out a seat for him at the dinner table.

She begins seeing a young boy, at first worried he’s following her, but later engaging with him as he helps her one day with her daily chores. Is he real, or ghost? Deng suggests he might be the reincarnation of a mysterious man, Zhao, from her past, suggesting she makes good on her “debts”, and the film gives us only hints at her sanity. “Since his death it’s as if a shadow has been following me,” she says.

There’s something of Hidden in the set up, and like Haneke’s film, the whole situation unearths some terror of the past that cannot be rectified. That’s Wang’s intention: setting up a film that raises the issues of China’s lack of admission of past mistakes. In that way it’s a remarkable film – the title reveals to be ironic as, in China, the past hasn’t been forgotten; it’s the people in factories and the farmers in the countryside that the Chinese government have let down. Late in the film, we travel with Deng to the countryside where she grew up and where workers speak out against the authorities who say the government has given “No prestige for the workers”. Indeed, in the film’s sucker-punch ending, her past, and so China’s past, drives the guilt Deng so profoundly feels. Ed Frankl.

VENICE INTERNATIONL FILM FESTIVAL RUNS UNTIL 6 September 2014.  Follow all our  coverage under the FESTIVAL banner.