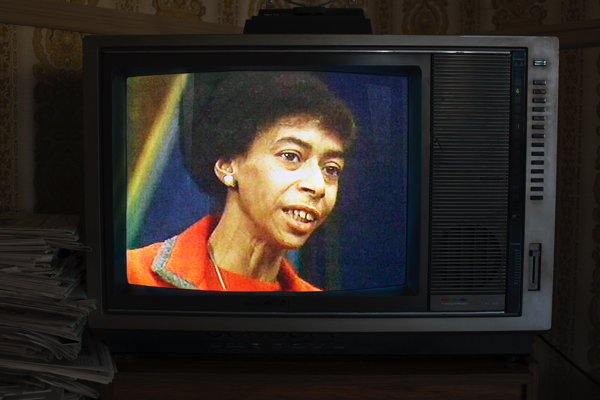 Director Matt Wolf (Teenage) has created a immersive portrait of Marion Stokes (1929-2012): socialist organiser, civil rights activist, librarian, TV presenter and archivist. Of  her many achievements is a collection of recorded American TV News programmes, spanning the years from 1977 to her death. This valuable reference is an achievement that will keep her name alive as long as TV history is being made.

Stokes’ personal history is as uncommon as her prodigious output: she was given up by her mother for adoption and later traced her birthmother to learn that now had brought up a family after Marion had left. A child of the big Depression, the memory of poverty never left her: her first husband testifies to her membershop of the USA Socialist Party, which he calls “a very unattractive organisation”. This, and the fact that she was a civil rights campaigner, cost her the librarian job. Nevertheless, Stokes was anything but a victim or martyr, with her future husband John Stokes (from a family of ‘Old Money’ in Philadelphia), she hosted a local TV programme researching, among other topics, the way news shows were produced.

Her relationship with her own son Michael Metelits (from her first marriage) was frosty, as were her feelings for John Stokes’s own kids from his first marital relationship. For many years she couldn’t forgive Michael for lacking her intellectual rigour. One of John’s daughters relates how she had to sneak up secretly to talk to her father who later begged her not to mention their meeting.

Marion and John led a more and more secluded life, helped by a chauffeur, an assistant and a nurse, who all spoke highly of Marion. The couples’ huge flat in a luxury apartment block on Ritterhouse Square, a prime location, was soon too small to house the 40,000 books even more tapes the couple collected – they rented multiple flats to cope with the overflow. Strangely enough, Marion was a great fan of Steve Jobs, talking about him like he where her own son. She also bought Apple shares when they were valued at only USD 7.00, and collected all 192 Apple computers from the very beginning of ‘The Classic’.

Long before Kellyanne Conway and Donald Trump coined the term ‘Fake News’, Marion had already cottoned on to the questionable coverage of the Iraq/Iran wars. But it was not only the main stories that fascinated Wolf: “Ultimately it was things we were not looking for, that were most interesting”. Such as a 1998 story, of 84-year old Rose Martin, who was buried in her white Cevrolet Corvair.

It took over fifty volunteers to catalogue the 70 000 EP (extended play) tapes with Marion’s comments on the spine giving a clue for the Google spreadsheets. This is a stunning documentary. Keiko Deguchi has done a superb editing job, and Chris Dapkins and Matt Mitchell’s talking head images are one of the better ones. Marion Stokes died on the day the school massacre of Sandy Hooks (Connecticut) unfolded on TV – luckily, accordingly to her son, she died before the news showed the grim images. AS