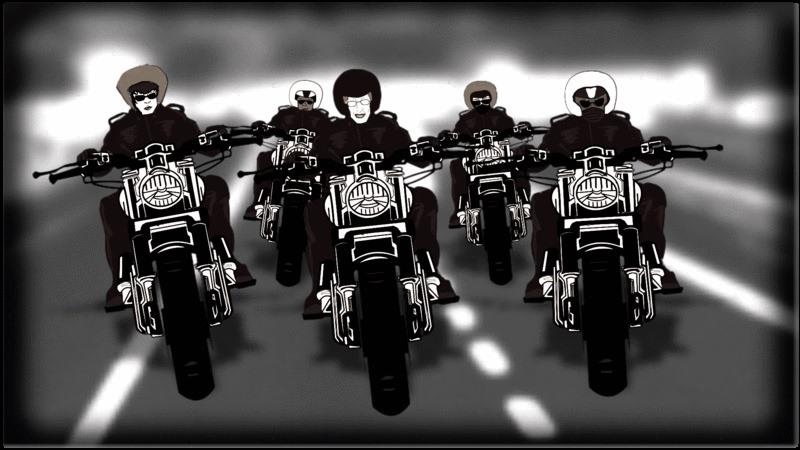 The collective of Harri Shanahan, Siân A. Williams and producer Siobhan Fahey serve up a slice of subversiveness from the 1980s centred round a group of women activists who got together at Greenham Common, then decided to spice up the not-so-exciting London scene, taking over Women’s Centres and Gay Bars. In Brixton where squatting was not entirely legal, the DYKES started a vibrant underground culture with an SM club.

It was a time of revolt against Prime Minister Margaret Thatcher’s administration: to create a Lesbian Fetish Club was in itself an open protest against the government’s ‘mishandling’ of the Aids Crisis and the introduction of Section 28, which basically forbade any mention in school curriculums about the existence of non hetero-sexual activities. The animated title sequence leads the audience into wild discussions and graphic descriptions of sexual scenes. The group was constantly under homophobic attack in the streets, so they just lived by night. But the danger came also from another front: mainstream feminists picketed the club and forced entrance with crowbars and axes. They accused the Rebel Dykes of anti-feminism and violence. The Rebel Dykes counter with action: invading the BBC News and chaining themselves to the furniture; they also founded sex-toy businesses and erotic Magazines – often having to fight the incriminating laws.

1981-1991 was a pivotal time in the history of alternative culture: kink, fetish, hedonism, music, drugs and political activism developed, leading to the formulation of trans rights and black queer life. It should be mentioned, that The Rebel Dykes were an international set-up: Seija came from Finland, Baya fled repressive East Germany, and Lulu was a San Francisco based photographer. Music plays a central role in the feature: Britpop artist guitarist Debbie Smith, the “most celebrated Black female guitarist”, is the film’s leading narrator. The archive music used is of precious cultural importance since women musicians rarely signed contracts in a male dominated business. The film’s composer, Ellyott, who works with ‘Sister George’ and ‘Night Nurse’, is the founder of Rebel Dyke and Queercore. The archive, consisting of mini-discs, digitised cassettes and VHS tapes, will be house permanently in the Bishopsgate Archive, London. Overall, the story-telling has multiple viewpoints, not a singular perspective.

Co-director/co-editor/animator Harri Shanahan, who studied filmmaking at university and produced post punk/experimental music videos, wanted “to tell the story of the Rebel Dykes because they “felt a kinship with their punk rebelliousness and their DIY approach to art and culture. It has been an amazing experience to meet these trailblazing, kickass people and to have the opportunity to be part of telling their story”.

The Rebel Dykes’s have virtually been written out of the history of the Queer movement, but it is a true revolutionary movement of female, non-binary and trans voices, celebrating direct action. So far unseen archive footage shows the Lesbian Strength March (1988) and the “Lesbian Avengers” who ab-sailed into the House of Lords, the night when ‘Section 28’ was passed into law, not to be revoked until 2003. AS