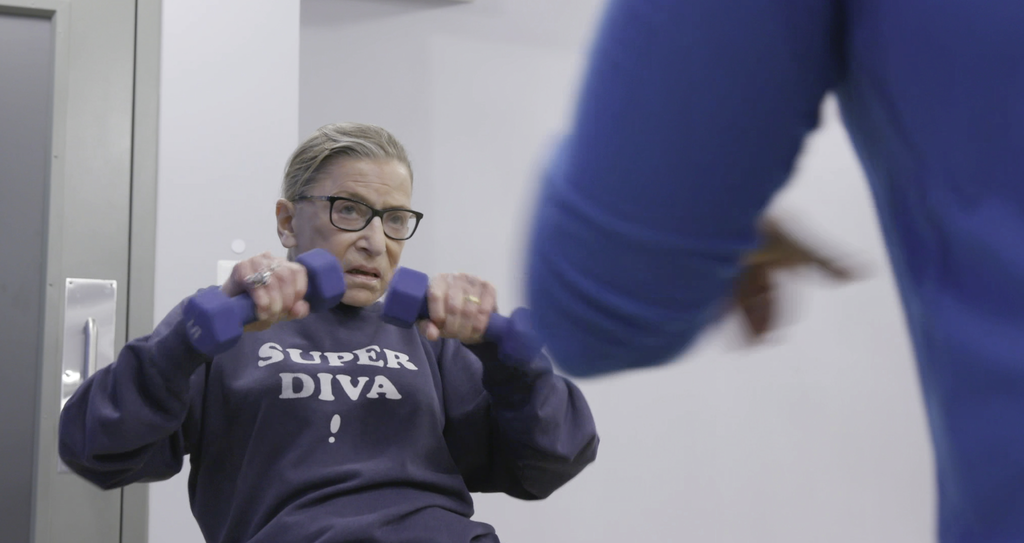 To say that ruth Bader Ginsburg is a force a to be reckoned with is an understatement. But never has a woman used her feminine charm to greater effect as this outstanding Supreme Court Justice. Variously called “a witch”, “a monster” and “a zombie”, among other things, Ginsburg is slender and rather attractive. Clearly despite her professional successes, she is not without her detractors, to put it mildly. And Trump goes so far as to call her an “absolute disgrace to the Supreme Court.” That said, Julie Cohen and Betsy West focus on her many achievements in their positive biopic. Far from being hagiographic, it doesn’t quail away from her outspoken nature that continues to make her, at 85, a fearsome and unswerving advocate of women’s rights. She has also been a loving wife and a mother of two. But it’s the calm and indomitable way that she achieves her professional goals that is the thrust of this intelligent documentary.

Born into a Jewish family in Brooklyn, 1933, Ginsburg lost her both sister and her mother before she graduated from hight school. But her husband Marty Ginsburg was to prove a guiding light in her struggle to make a name for herself, and she married him and had two kids family before starting Law school at Harvard, where she was one of nine women in a class of over 500 men. Despite her obvious talent she couldn’t fine a job in New York, a fact she put down to being a woman.

As in all the professions, the devil is in the detail. But Ginsburg possesses a fine intellect and an infinite capacity for absorbing facts and legal complexities. This capacity to handle mind-numbing minutiae has served her well when tackling various legal ground-breaking legal precedents that have quite literally changed the working world for American women. Cohen and West move swiftly to chronicle Ginsburg’s achievement such as toppling the Virginia Military Institute’s male-only admissions policy. Ginsburg came to office during the Clinton administration and still reigns in office despite her overt criticism of Trump which she acknowledges was probably not her best move. Yet her resilience and unfailing competence has helped her to move mountains in the fight for female rights and empowerment in the workplace. MT

ON RELEASE FROM 4 JANUARY 2019 AT BERTHA DOCHOUSE and NATIONWIDE.