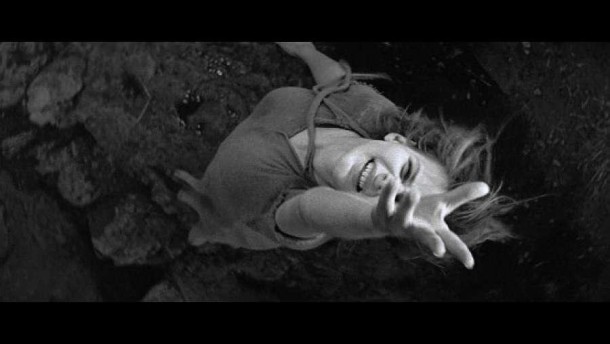 One of the major rediscoveries on Blu-Ray/DVD has been John Guillermin’s 1965 film RAPTURE. This remarkable work had almost vanished from film history. On its initial release American critics were kinder than the British press but the film was largely ignored and under-promoted, failing badly at the box office. It was a classic case of general failure to appreciate cinematic tone and ambition.

RAPTURE effortlessly conflates the genres of gothic romance; fairy tale; psychological drama and even the brief early sixties fascination with films about mentally disturbed women. Lilith (1964), David & Lisa (1962), Repulsion (1965) come to mind here, and perhaps, What Ever Happened to Baby Jane? (1962). Maybe RAPTURE’s purpose is to depict a tender coming of age story of a teenager ‘afflicted’ with mental heath issues.

Agnes (Patricia Gozzi) lives in a farmhouse in Brittany with her father Frederick (Melvyn Douglas) and their housekeeper Karen (Gunnel Lindblom). When they meet Joseph (Dean Stockwell), a convict who has escaped from a prison van, he and Agnes become sexually infatuated, their relationship threatening the overbearing hold that Frederick, now a retired judge, has over his daughter.

RAPTURE could easily have been a melodramatic mess. But with John Guillerman’s sensitive and understated direction the film’s all round superlative acting; Marcel Grignon’s beautiful photography – especially of seascapes and farm interiors; the lyrical music score (vintage Georges Delerue) and intelligent scripting (Stanley Mann) something very special develops. If there is one creative element that is crucial to the success of this marvellous film, it is the unforgettable performance of Patricia Gozzi in a difficult role that manages to avoid histrionics or sentimentality.

Her characterisation of Agnes is totally convincing in evoking fragile innocence, and ambition to unearth the deeper truths of her sexual awakening. She is forced to reconcile her own private world with the real world. Patricia Gozzi magnificently modulates a struggle between solipsism and a need for both intimacy and empathy with other people. Gozzi brings to her part such heartbreaking emotional power that makes it possibly one of the greatest female performances ever realised on film.

The scene where Agnes makes a scarecrow using her father’s old wedding suit,
takes the obsession to a whole new level – it’s the latent desire for an asexual object to be transformed into a real man. On a stormy night, Agnes’ wish appears to come true when the convict, dressed in scarecrow’s clothes, approaches her. Here Gozzi’s acting and Gullierman’s direction are powerfully integrated.

Patricia Gozzi was as remarkable in her earlier film Sundays with Cybele (1962). An interview with Gozzi, now in her mid sixties, appears as a DVD extra here. Sadly, there is no such interview on the RAPTURE disc. In tribute to Gozzi, the BFI should interview her onstage accompanied by a handful of films she made. If that never happens, then please go out and buy RAPTURE and celebrate Gozzi and everybody involved in its production. Alan Price