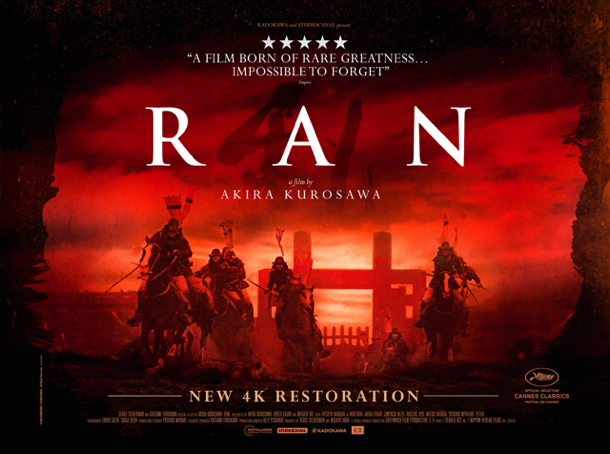 RAN is an epic undertaking of extraordinary ambition and the most expensive Japanese film created at the time. Exquisitely delicate, poignantly moving and brutally violent, the wartime drama was Akira Kurasawa’s final masterpiece, his third Shakespeare adaptation – a jidaigeki re-imagining of the literary legend of King Lear – it vibrantly depicts the devastating abdication of a 16th century Sengoku-era warlord in favour of his three sons.

According to tradition, Lord Hidetora (a boldly physical performance from Tatsuya Nakadai) leaves his kingdom to his eldest son, banishing his youngest and most loyal. Tragedy ensues as the eldest son turns against him, encouraged by his wife,, the evil and untrustworthy Kaede (Mieko Harada). Operatic in tone and set on a plain of black volcanic ash, the violent widescreen battle scenes take on a mystically powerful resonance as they play out in silence accompanied by Woman of the Dunes composer Toru Takemitsu’s original orchestral score.

Kurasawa cleverly melds moments of serene beauty – the Buddhist prayer scene on the castle, and Hidetora sleeping under the blossoms of fruit tree – with those of coruscating terror: the horrific blood-soaked images of the burning castle on the slopes of Mount Fuji set against the armies of soldiers who swarm around like coloured ants. There is a searing beauty to the vehement scene where the scheming virago Kaede threatens her brother in law with a symbolic sword, before violently seducing him, demanding he kill his wife and marry her. Much of her performance and that of Hidetora was influenced by Noh theatre, which emphasizes the ruthless, passionate and single-minded nature of these characters. Harnessing the wildness of the weather and some magnificent scenic Japanese locations, RAN – meaning Chaos – was for the most part filmed in long shots with very few close-ups. It also featured hundreds of handmade costumes which took years to design and craft by award-winning designer Emi Kada. Akira Kurosawa is regarded as one of the most important and influential filmmakers in the history of cinema. RAN is one of the jewels in his glittering 57 year career. MT