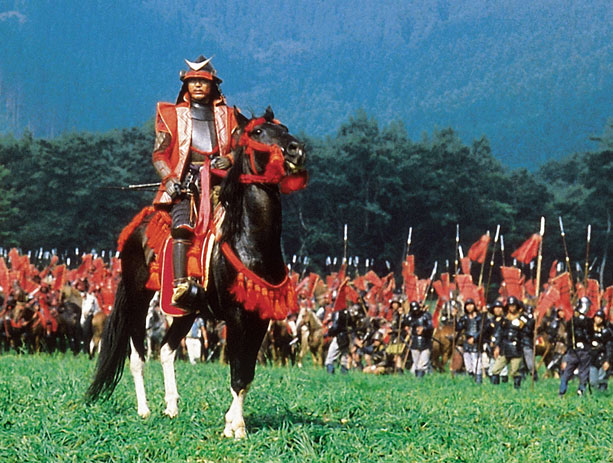 Director/co-writer Akira Kurosawa was seventy-five when he finished his final epic action drama Ran (Chaos), loosely based on Shakespeare’s King Lear, using elements of Japanese theatre it features epic scenes of battle and a rousing score by Toru Takemitsu. The script had been ten years in the writing and he still needed a Japanese producer for the twelve million dollar project. Finally, Frenchman Serge Silberman took the risk, and shooting started in June 1984 involving 1,400 extras (all with complete body armour) and 200 horses. Filming was dominated by the loss of sound designer Fumio Yamoguchi, and Kurosawa’s wife Yoko Yaguchi at the age of sixty-three. But the movie premiered at the first Tokyo Film Festival in May 1985, in the absence of the director.

In medieval Japan Hidetora (Nakadai) is an ageing warlord keen to retire from public life and leave his empire to his three sons Taro, (Terao), Jiro (Nezu) and Saburo (Ryu), the youngest and his father’s favourite. Saburo warns father that the brothers intend to start a war for total domination over him, but Hidetora fails to recognise the elder brothers’ resentments, and Saburo is banished for refusing the pledge of allegiance. As Saburo predicted, his older siblings soon take control leaving the old warlord basically homeless. Jiro and Taro’s wives Kaede (Harada) and Lady Sue (Miyazaki) have not forgotten Hidetora’s abusive reign of power that led to the genocide of Kaede’s family, and the blinding of Lady Sue’s brother, and Kaede is still keen on revenge. After a battle between Saburo and Jiro’s forces, the youngest prince is killed by a sniper. Hidetora dies from grief. Kaede then forces Jiro to kill Lady Sue and marry her instead. But after Lady Sue is killed by one of Jiro’s assassins, Kurogane (Igawa), Jiro’s loyal chief counsel and military chief decapitates Kaede. We are left with Kyomani the Fool (Peter) contemplating the scene of death and destruction.

Kurosawa combined King Lear with a Japanese medieval epic. The feature, shot by Takao Saito and Asakazu Nakai, is an absolute knockout in visual terms. Kurosawa capitalises on his aesthetic brilliance with Kagemusha, to create something quite magnificent with the use of static cameras that leave the audience in almost in command of the battle scenes, are the warriors fight on. Production designer Emi Wada, who won an Oscar (1986) for his mastery  – Kurosawa lost out to Sidney Pollack’s Out of Africa in an exceptional year the saw Hector Babenco, John Huston, and Peter Weir in the competition line-up.

It is easy to envisage Kurosawa at this point in his career very much identifying with the King Lear figure – he was shunted around in his own country, where his features were seen as old-fashioned – suffering the same fate as Ozu decades earlier. Kurosawa had just shot four films in the last twenty years in 1985 – he was a marginal figure in Japan. Consequently, Ran only just broke even in Japan, but was much more successful in Europe and the USA – today’s total box-office is 337 Million $ and rising. Kurosawa’s influence on Western cinema is enormous: Hidden Fortress would inspire Star Wars, The Seven Samurai were re-made as the The Magnificent Seven and Sanjuro was transformed by Eastwood into the Italo-Western A Fistful of Dollar and For a few Dollar More. But the same goes for Kurosawa’s ‘borrowings’: Apart from Ran there is Throne of Blood (Macbeth), Lower Depth (from Gorki). The Idiot (from Dostoyevsky) and Ed McBains police thriller adapted by Kurosawa as High and Low.  Unlike Lear, Kurosawa leaves behind a treasure trove of achievements: world cinema would not be the same without him. AS

NOW ON BFiPlayer in celebration of JAPAN 2020