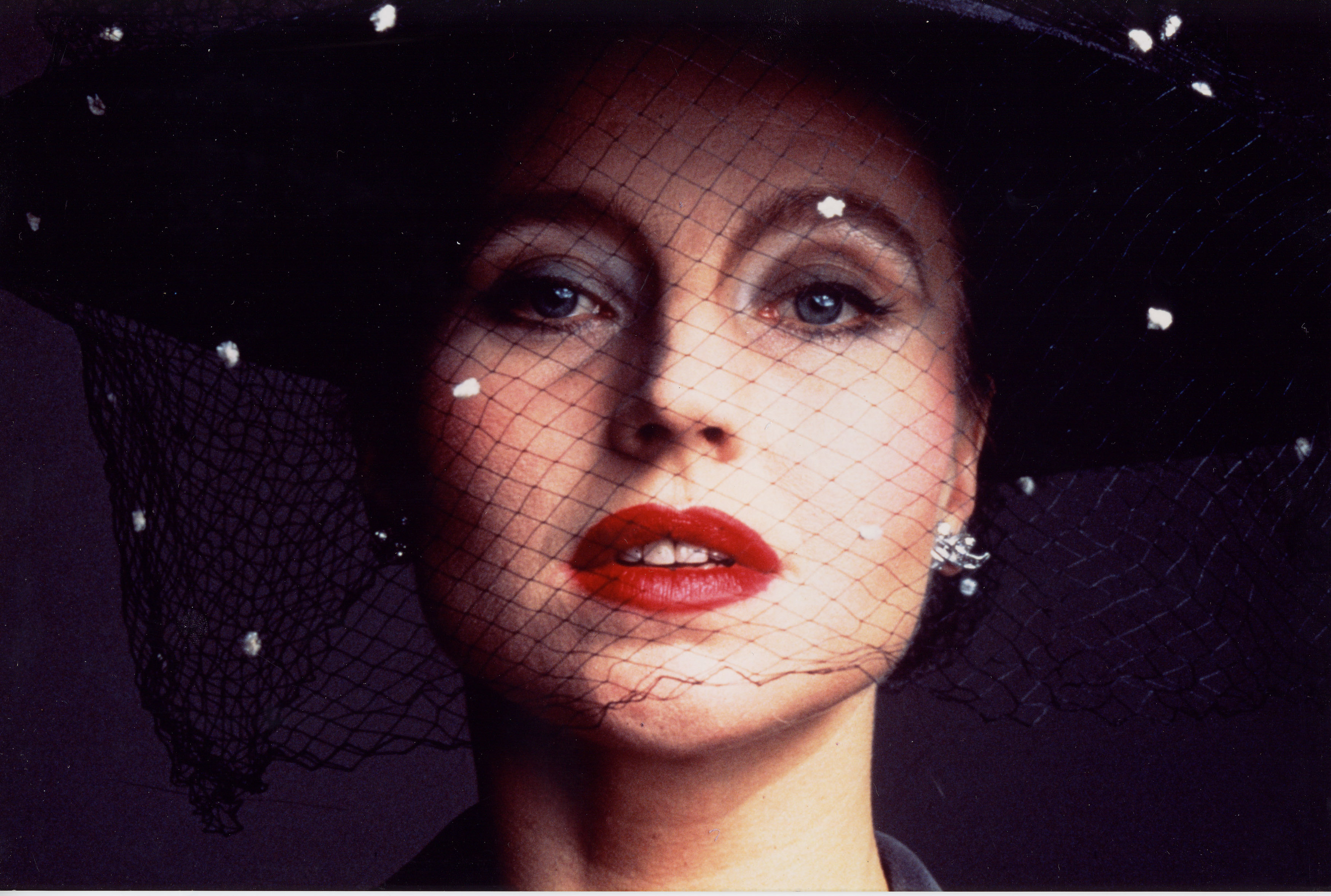 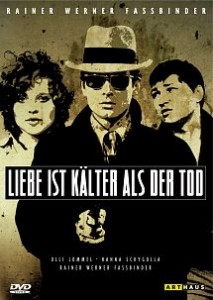 Fassbinder’s LOVE IS COLDER THAN DEATH | LIEBE IST KÄLTER ALS DER TOD made a low-key feature debut at Berlinale Film Festival in 1969, heralding the prolific career of one of Germany’s greatest auteurs of the second half of the 20th century. Critics talked about the stylish black and white aesthetics of DOP Dietrich Lohmann (who would go on and shoot ten more Fassbinder films); were puzzled by the rather simplistic but enigmatic storyline and liked the performances including the director’s turn playing his own fallen hero Franz, a pimp, who does not want to cooperate with the Mafia and falls in the love with Joanna (Hanna Schygulla), who works for him. Ulli Lommel is the killer Bruno, a sort of German version of Alain Delon in Melville’s Le Samurai, complete with sunglasses. Fassbinder commented at the Festival “I want the audience to formulate their own personal take on the film. That’s all I’m interested in. That’s much more political than forcing them to believe that the police are the worst aggressors. I am not interested in that sort of cinema, I am against the idea of people marrying and producing children without thinking or having any idea why they love each other”. His statements were as enigmatic as his film, and one Berlin critic wrote “Fassbinder does not care if he makes another film, he just wanted to make statement”. How wrong he turned out to be. 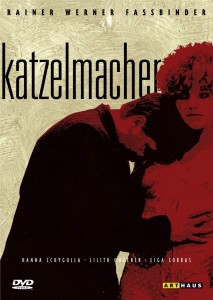 KATZELMACHER was shot in only nine days during August 1969, just four months after Love is colder than Death. Based on Fassbinder’s play of the same name. Fassbinder against the central protagonist, Jorgos, a Greek ‘guest-worker,’ who falls foul of the youthful German machos, living a desperate existence in the backstreets of Munich. In much the same way as Fear Eats the Soul, (which he could go on to make in 1974), the drama uses Jorgos’ romantic encounters in the city to evidence the political undercurrent of racism, particularly amongst the sub-proletariat. Love and money dominate this male world where men have to buy their women, because of their inability to love. Katzelmacher – again shot by Lohmann in stunning black and white – is just a variation of Fassbinder’s debut, but shows the role of the immigrant worker, a theme that would dominate many of his films.

BEWARE OF A HOLY WHORE (WARNUNG VOR EINER HEILIGEN NUTTE) Fassbinder turns the camera on himself in this semi-autobiographical feature about filmmaking. Shot in 22 days in Sorrento, Italy, during September 1970, the film had his premiere at the Venice Film Festival a year later, where no “Lions” were awarded. For no obvious reasons the narrative is set in Spain where a film team is waiting for the director and the subsidy money from the Federal Government. When the director Jeff (Lou Castel) arrives, he immediately becomes the centre of total chaos. The ageing star of the production (Eddie Constantine as himself) seems lost in the much younger crowd and starts a relationship with the actress Hanna (Schygulla). Jeff explains a very tricky shot to the cinematographer, and the simple idea of the film to Constantine: “Patria o muerte” is about the government’s brutality, which is legitimised by the state. But crew and cast are still fighting arguing, drinking and Jeff is beaten up. 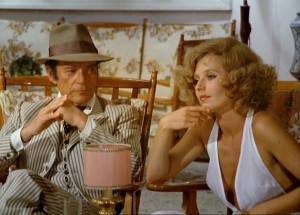 But in spite of everything, the shoot finally gets underway. Michael Ballhaus’ widescreen images echo Raul Coutard’s work for Godard’s Le Mépris, and Fassbinder’s own lousy, little line producer Sasha could have been equally at home in Godard drama. For Fassbinder, BEWARE OF A HOLY WHORE was a good-bye to collective filmmaking: “The film is about the production of a film, but it is much more about how a group works, and how the leading status of the director develops and is used by crew and cast. I am not sure, if the film was a new beginning, but it was a surely an endpoint. With this film, we have buried our idea of collective work which we started [before filming] with the Anti-Theatre group in Munich. I did not know, how we would go on in future, but I knew we could not go back. This film is about what happened in Whitty (1970), when too many people relied on me, and I had to take on more and more responsibilities. During the shooting of Whity, everything collapsed: BEWARE OF A HOLY WHORE is a about what happened on the set of Whity.” 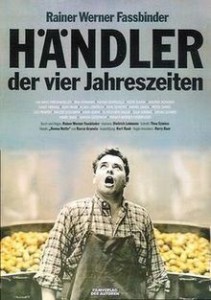 By 1971 Fassbinder had a prodigious oeuvre to his name and THE MERCHANT OF FOUR SEASONS (HÄNDLER DER VIER JAHRESZEITEN) was his twelfth feature film, a tragic melodrama shot in eleven days in August of that year. Set in the ’50s, like many of his later films, The Merchant is a story of a loser during West Germany Economic Miracle. Hans Epp (Hans Hirschmuller) has been a soldier in Foreign Legion, and a policeman. But now he is reduced to selling fruit and vegetables in a street market  – in a country where wealth and prosperity is an easy game. His wife Irmgard (Irm Herrmann), is financially aspirational, pushing her husband to the limits with emotional coldness. He suffers a heart attack and afterwards employs an old army friend Harry, to do the physical work. But Hans does not give up on Irmgard, he wants to be loved. The triangle becomes a trap for Hans. Fassbinder was impressed by the films of his fellow German director Douglas Sirk, and admitted that he integrated some elements of Sirk’s Hollywood melodramas into The Merchant. “In the beginning, I Ioved to create cool, detached films. Then I got interested in dramatic films, now I prefer melodrama.” 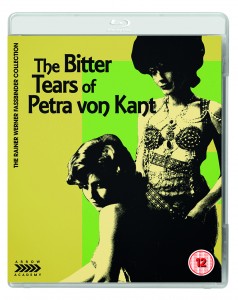 THE BITTER TEARS OF PETRA VON KANT (Die bitteren Tränen der Petra von Kant), a psychological drama, followed in the wake of The Merchant and was shot in ten days during January 1972. Control-freak fashion designer Petra von Kant (Margit Carstensen) lives with her servant and assistant Marlene (Hermann) in a symbiotic relationship: Petra uses Marlene in every way, but Marlene takes this all on board, feeling a masochistic pride in her subservient status. When Petra falls in love with the much younger Karin (Schygulla), she soon finds out that the young woman is only after her money. When Karin’s husband returns from Australia, Karin leaves Petra and returns to her husband. Petra admits she only wanted to possess Karin, as she does Marlene. She is contrite, and offers Marlene a position of equal rights in her business, but Marlene simply packs her suitcase and leaves. Suffering and subservience is her raison d’être – She did not want equality. Fassbinder later commented “Marlene leaves Petra because there is a certain power in being subservient: being in charge herself involves a degree of risk and responsibility. Many interpreted the outcome as a liberation for Marlene, but that is not the case: those who have willingly accepted the yoke of subservience for 30 years, often find total freedom and the responsibility it entails, a poisoned challice 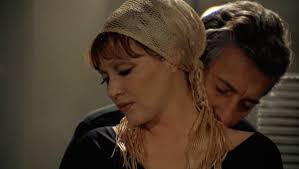 CHINESE ROULETTE (CHINESISCHES ROULETTE) By the summer of 1976, Fassbinder was taking more time to direct. 1976 also saw the making of Satansbraten and Bolwieser and he took over a month to shoot this thriller in Beyreuth and Thurnau Castle in Bavaria. CHINESE ROULETTE is the nearest Fassbinder would get to Claude Chabrol, one of his early heroes. Ariane (Carstensen) and her husband Gerhard (Alexander Allerson) pretend to leave Munich for separate destinations for the weekend, but they soon reunite in their Bavarian castle. Ariane meets her lover Kolbe (Lommel), while Gerhard is looking forward to seeing his lover Irene (Anna Karina). Their handicapped daughter Angela also turns up with with her teacher Traunitz (Macha Meril), who is seemingly unable to speak. When Angela starts to play a kind of truth game called Chinese Roulette, the adults fear and mistrust of each other suddenly becomes palpable. For Fassbinder, it was a new beginning: “This is the first film where I don’t use the actors to tell the story. The main theme is ‘better the devil you know’: the protagonists all cling to their relationships, even though these are dysfunctional. There is a certain comfort in routine and core misery, which in itself is a kind of happiness. 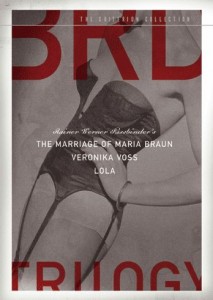 THE MARRIAGE OF MARIA BRAUN (DIE EHE DER MARIA BRAUN) Shot in just over a month during the winter of 1978, this tragic love story was rejected by Cannes Film Festival but premiered at the Berlin Film Festival in February 1979, where it won a Silver Bear, and Hanna Schygulla Best Actress. Maria (Schygulla) has married Hermann (Klaus Lowitsch) during WWII but he fails to return after the war. Working in an American bar, Maria discovers her husband is dead and she falls in love with the much older American GI Oswald (Ivan Disney). Out of blue, her husband turns up when she is about to go to bed with Oswald, forcing her to make a difficult decision. In the interim, she has discovered personal freedom but Herrmann simply wants to control ‘the old’  Maria. Marriage is perhaps Fassbinder’s most mature film, influenced mainly by Godard, Brecht and Wedekind, it is poetic realism on an epic scale. Fassbinder’s critique of the crass materialism in West Germany after WWII is again a strong component. Schygulla had obviously matured very well since 1969, and became an international star. Fassbinder was emphatic about his latest outing: “It is a multi-layered film, much is hidden beneath the simple storyline. The audience has the chance to enjoy a love story, or something much more complex”. AS/MT