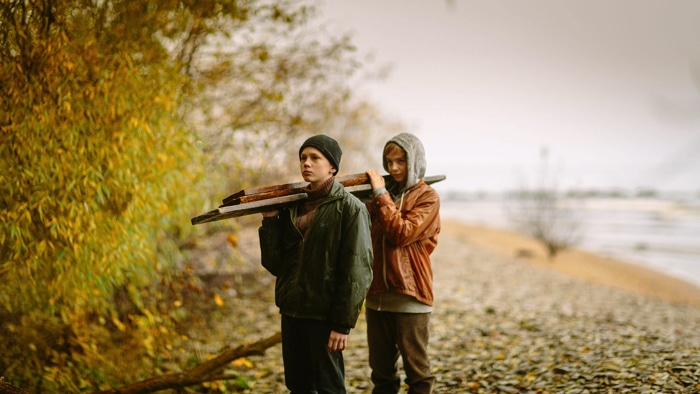 Hanging on in quiet desperation is the Estonian Way….

In his astonishing first film that premiered at Tallinn Black Nights, Janno Jurgens opts for a quirky dark comedy approach to exploring complex male dynamics in the wide open lushness of a rainswept Estonian backwater in summer and through to an icebound wintertime. This is essentially a love/hate buddy movie that derives tremendous energy from its widescreen settings, and DoP Erik Pollumaa creates a great sense of place, breathing life into the intense domestic scenes which are imaginative, limpid and gracefully framed despite the quiet hopelessness they often portray.

Taking a freewheeling approach to the storyline Jurgens observes his – largely monosyllabic – family members as they gradually develop, getting to know one another again in a film that relies on its potent atmosphere, wide-screen spaces and breezy occasional score – rather than dialogue-  to lead us into an engaging study of masculinity seen from the perspective of a thoughtful pre-teen boy who seems the most mature and grounded of his male family members, possessing a gentle serenity and self-possession despite his tender years. 12 year old Ats (an impressive debut for Borkmann) lives with his morose and conservative ageing father and willowy blond mother Merlin (Kriisa is a dead ringer for Kati Outinnen). His much older brother Rain (Ojari) has finally come home, as a last resort, after wandering around and presumably failing to find a workable life of his own. Although he’s clearly a bog-standard loser, he seems to exert a strange fascination for Ats, although his days are spent mooning aimlessly around until the arrival of Aleksandra (Poplawska) gives him a sense of gravitas. Meanwhile Merlin also has a secret up her sleeve. Jurgens clearly sees his  female characters as liberated, stabilising influences over their rather brutish male counterparts. And Ats is clearly learning fast while remaining bemused at some of the bizarre adult behaviour he has to countenance: a violent tiff between his father and brother, and overt sexual signals from his friend’s older sister.

In this quiet corner of Estonia society is clearly changing and there is a clear sense of woe and a confusion for these men who are making an uneasy transition from the gilded past, where they were more cognisant and comfortable with their roles, and an uncertain future. But there are often moments of sublime happiness t00, such as Rain’s drive along the beach promenade with Aleksandra, and Merlin’s dance in the factory.

Rain continues to be at odds with his father, but Ats finds his elder brother an inspiring role model as he ponders the mysteries of becoming a man himself, experiencing that love can be transformative for the male psyche. This is a quirky and memorable drama that gets an emotional kick from its silent sequences and introspective characters given considerable depth by a strong and sensitive cast showing how men often struggle with complex emotions they can’t always express. MT