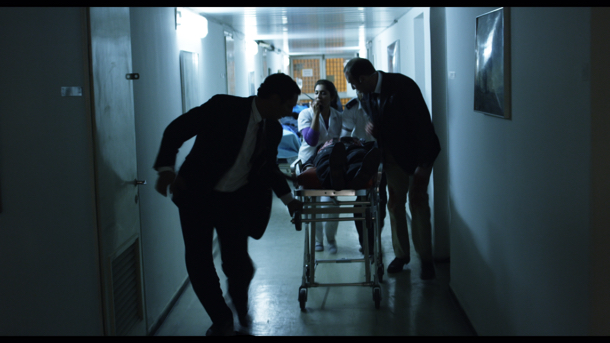 Yitzak Rabin, Prime Minister of Israel, was assassinated on the evening of 4th of November 1995 on King Square, Tel Aviv, after a rally for his peace policies. Amos Gitai’s sober docudrama tries to unravel events and draws far-reaching conclusions from repercussion of his assassination.

Strangely enough Rabin’s murder was caught by a cameraman who happened to witness this historical moment. The opening sequence with long overhead shots over King Square and jerky b/w images of the shooting give the film an intensive start; what follows are mainly re-staged scenes from the Shamgar commission which (under the leadership of Meir Shamgar, president of Israel’s Supreme Court) undertook the task of establishing the circumstances of the assassination. A third level shows the assassin, Tigal Amir (Yevet), preparing for his hideous crime, his interrogation in the immediate aftermath of the three fatal shots, as well as scenes from his right wing, fundamentalist environment.

These latter scenes are frightening featuring one of the the leaders of the movement declaring a ‘Din Rodef’ on Rabin -the equivalent of a Fatwa.  Leon Trotsky was the last person to receive this damnation. Amir is unrepentant, he smiles sardonically during his interrogation, feeling superior like most political offenders, who take refuge in martyr status and declaring Rabin a schizophrenic, who should be committed to a mental asylum – the projection here is axiomatic.

What emerges from the Shamgar hearings is unconscionable: there was no efficient security for the prime minister (or his entourage, including his successor Shimon Perez, who gives a sort of introduction to the film). Everyone could have access to him and hardly anyone was questioned by the police. Witnesses speak of a total chaos regarding police and security forces, the assassin was a few feet away from Rabin when he fired his shots.

Rabin, a soldier for more than 27 years, had signed the “Oslo Accord” with Arafat, which would have resulted in a separate, Palestinian state. For the orthodox and right-wing politicians, this was treacherous: in the month before the assassination, placards showed Rabin either in Nazi or PLO uniform and his efigy was burned. There was certainly a murderous atmosphere in Israel, reaching even the Knesset. As Gitai said in a press conference “the Oslo accord was a small window which occurred in ths conflict, Rabin’s death ended all hope, and his murderer was not the only one who knew that the peace process would be dead without him”. In 1996 Perez’ Labour Party lost the General Election to the right wing coalition.

To say that RABIN, THE LAST DAY is not a typical Gatai film, is praise indeed. The director has, for once, let the subject of this docu-drama dictate the narrative. There are no side-shows which usually spoil many Gitai films. Thanks also to the brilliant work of DOP Eric Gautier, this is a thorough research project, told with the neccessary detachment, but still evokes intense emotion. To say that Israel was never the same after this tragedy is an understatement: The orthodox underground from which Amir emerged to kill, is today only a small step away from forming the government. Theodor Herzl, Israel’s founding father, was an enlightened liberal who never envisaged a state run on the lines of backwardness and fundamentalism, but it now looks as if the Rabin murder might have only been the first step on the road to a dictatorial, medieval era in the 21st century. AS