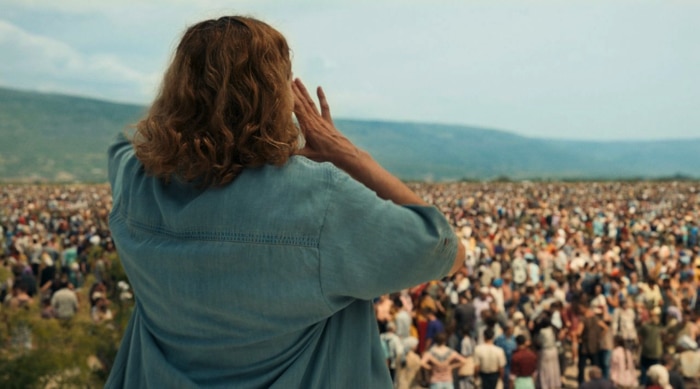 Jasmila Zbanic follows her 2006 Berlinale Golden Bear winner (Grbavica: Land of my Dreams) with another intense look at the  civil war in Srebrenica when over eight thousand people were butchered by Serbian General Ratko Mladic on the 11th of July 1995.

The action follows Aida Selmanagic (a fierce Jasna Buricic) an interpreter for the UN in the small town of Srebrenica. When the Bosnian Serb army moves in, her family is one of the thousands desperate for sanctuary in the vast UN camp.

The UN commander Colonel Franken (Heidenbergh) has been promised by his superiors that the UN air force will bomb Mladic’s troops, if they have a go at the city. But the planes never appear, and Franken tries in vain to reach somebody at UN HQ. In vain. The UN Secretary General is on holiday. Meanwhile, Aida manages to get her husband Nihad (I. Bajrovic) and two sons Hamidija (Leer) and Sejo (D. Bajrovic) into the safe UN compound (women are the bosses in this part of the world). But when the bombardment does not materialise, ‘saviour’ General Ratko Mladic (Isakovic) his soldiers start “evacuating” the compound to a nearby place of safety. Everybody is aware of Mladic’s real intentions, and Aida fights a hapless battle to get her family on the UN list for safe conduct. The three men are herded with others into a make-shift cinema nearby, before being gunned down from the projection room. In a maudlin epilogue, Aida visits their old flat years later, which is now occupied by strangers: she has to decide if she will take up the offer of returning to her former teaching job.

All very melodramatic in spirit, and carried by the irrepressible  Jasna Buricic, Zbanic keeping everything understated, the focus is the personal conflicts at the heart of this human tragedy. Aida has a certain amount of protection due to her UN status, but gradually loses control when Mladic’s troops appear at the UN compound gates. her family reduces to pawns in the fight between Mladic and the UN forces.

Everything is going in her favour at first but as the nerve-racking plot plays out it is touch and go whether their names will appear on the final list, and some of the final scenes are emotionally charged. Major Franken (Thiry) is only technically in charge and when his superiors fail to back him up with the bombardment, he is in the hands of Mladic – having no real power to put a stop to the eventual slaughter. DoP Christine A. Maier uses close-ups to chart the emotional dynamics of Aida and her family. The images of Mladic and his thugs loading women and men into separate buses, brings to mind history’s genocides. Zbanic directs with great sensibility, never letting any of the male protagonists off the hook in this coruscating chronicle of modern war. AS