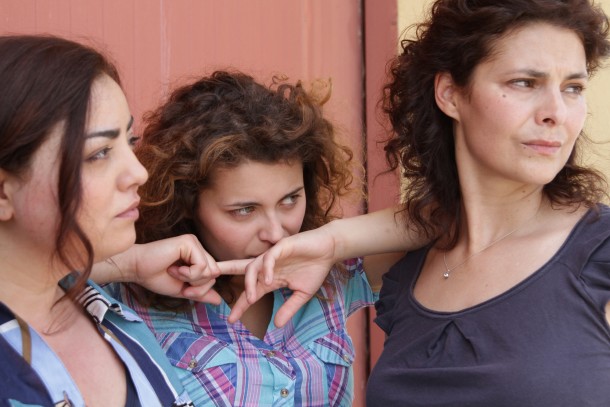 Edoardo Winspeare (Life Blood) has tried to create a modern family epic in the aesthetic forms of neo-realism, along the lines of Alice Rohwacher’s Cannes hit LE MERAVIGLIE. Whilst he not always succeeds, QUIET BLISS is an interesting family-saga, which is full of fights, reconciliations and renewed strife. Italy has always been known for its family businesses but Chinese competition and high loan-interests signal the end for a family-run clothing company in the Southern town of  Salento. As a result, four women are made homeless and the family home has to be sold too. The mother, Salvatrice (Boccadamo) has three very different daughters: Adele (Cascario), who had run the factory with her cousin Vito (Russo), a goody-two-shoes, suffering from chronic psycho-somatic pain; Ina (Licchetta), who does not pull her weight in the factory and is more interested in the young men of town and Maria (Matteis), who has an university degree and is an aspiring actress. After Vito has unwisely taken up smuggling with the criminal Cracifixo, the men drift out of the picture to Switzerland, and leave the women to build a home and tend the olive orchards in the countryside. Bliss this is not, since none of the protagonists has changed – apart from Salvatrice, who marries the pious Cosimo. Adele still tries to “reform” her sisters, but her efforts are thwarted: Ina has an unwanted pregnancy and Adele’s selfishness nearly ruining Maria’s acting career. Her only friend in life seems to be Stefano, a former classmate, who tries to help her to reduce the still enormous loan payments to the bank.

QUIET BLISS begins intensely, the fight for survival in a global world is contrasted by the old-fashioned family intrigues. Together, they spell doom for Adele, who has to fight on two fronts. Her efforts at saving anything is finally thwarted by Vito’s smuggling affair, no wonder she sees men as an hindrance in life – just the opposite of Ina, who can’t have enough male attention. The tempo begins to limp when the women have arrived in the countryside, where too much time is spent on agricultural questions. The long shots, reminiscent of the Brothers Taviani, compensate for a sagging last hour. Cascario (Winspeare’s wife) and Ina (the director’s stepdaughter) head a very strong female cast. Camerawork tries to be innovative, working very hard to create a huge dichotomy between the factory and rural life, without making an idyll out of the latter. The length of QUIET BLISS is its main detractor, hampering the effectiveness of this otherwise watchable family drama. AS

SCREENING DURING CINEMA MADE IN ITALY FROM 5-9 MARCH 2015. TICKETS HERE