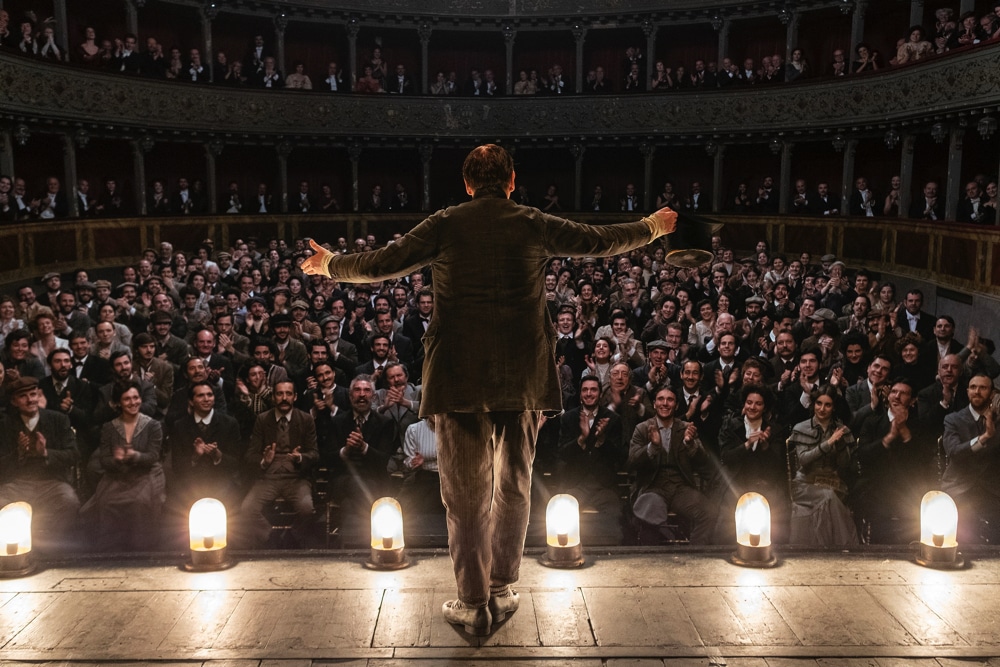 Scarpetta (1853-1925) who first took to the stage as a four year old, was best known for his role as the light-hearted slightly air-headed Felice Siociammocca, a typical Neopolitano who, in a break from tradition, was more good-natured than the darker stereotype of Pulcinella whose origins lay in 17th century ‘commedia dell’arte’ as a stock character from puppetry. Scarpetta was also celebrated for his plays – of which he wrote more that fifty – one in particular: ‘Poverty and Nobility'(1888), was later made into a film starring starring Sophia Loren and comedy star Totò. Scarpetta’s main achievement off stage was to translate into Neapolitan the standard Parisian farce of the era: Hennequin, Meilhac, Labiche and Feydeau. He also fathered actor and playwright Eduardo De Filippo along with two other children.

Martone’s begins his story at the beginning of 1900s, when Eduardo Scarpetta has already made his name as the most successful Italian comedian of the era, his plays are all box office hits, and the stage is his exclusive kingdom. But behind the scenes his unconventional family life is proving challenging, the drama tracing his eventually descent into darker times, including the his trial with the magniloquent poet Gabriele D’Annunzio.

Servillo lends his ebullient joie de vivre to the role in this lavish production which follows the star on stage and in real life in an around Naples and Rome in the mid 18th century. Martone and his writer Ippolita Di Majo keeping us entertained for over two hours with the gracefully-paced storyline, partly in Italian, and partly in Neapolitan dialect, and classically captured by Swiss Italian DoP Renato Berta (Au Revoir Les Enfants). MT