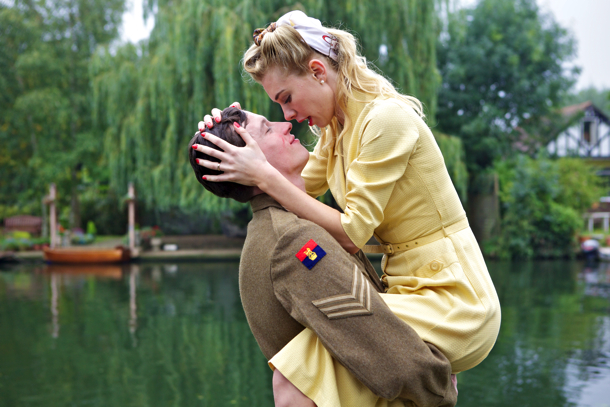 John Boorman’s follow-up to his wartime drama Hope and Glory is a gently rousing and entertaining family drama which will please the arthouse crowd and mainstream audiences alike. It offers a rites of passage snapshot of a golden era that seemed so important then, but now is just a cherished memory of fifties England with pretty frocks, cream teas, ginger beer and walks into the sunset.

After a scary childhood in London’s Blitiz, it’s 1952 and Bill has reached the tender age of 19 and is discovering girls and the joys of National Service. Britain has survived the War but is now entering an age of enlightenment where the younger generation have put away their flags and are challenging the new order and starting to think for themselves, or trying to. With rebellion in the air, and a new Queen (almost) on the throne, Bill (Callum Turner) is starting to question his allegiance to the Army: he could be sent to Korea or Kenya or he could just end up in a quiet backwater managing civilians. So in the comfort of his Home Counties mock tudor family home, he is very much an innocent young guy who has no experience of the real world or, indeed, the opposite sex.

Boorman’s faintly autobiographical piece evokes this post-war atmosphere with the verve and whimsy of ‘Five Go Mad in Dorset’. Mum is lovingly played by Sinead Cusack (her previous ‘dalliance’ with a neighbour acknowledged only by a knowing wave), Dad is a ‘pipe and slippers’ David Hayman. Bill’s best friend Percy is a subversive Caleb Landry Jones and the Sergeant-Major in the Barracks is brilliantly fleshed out ‘Dad’s Army-style’ by the reliable David Thewlis. In the absence of any real action, and certainly no ‘active service’ Bill and Percy play the usual insubordinate pranks on the Sergeant-Majors. Bill’s new love, Ophelia, is the elegant and luminous Tamsin Egerton who manages both f’emme fatale’ and ‘girl next door’ charm and could even be the making of him. Queen And Country is a gloriously upbeat message of innocence echoing all the sentiment of the Empire! God Bless John Boorman. MT