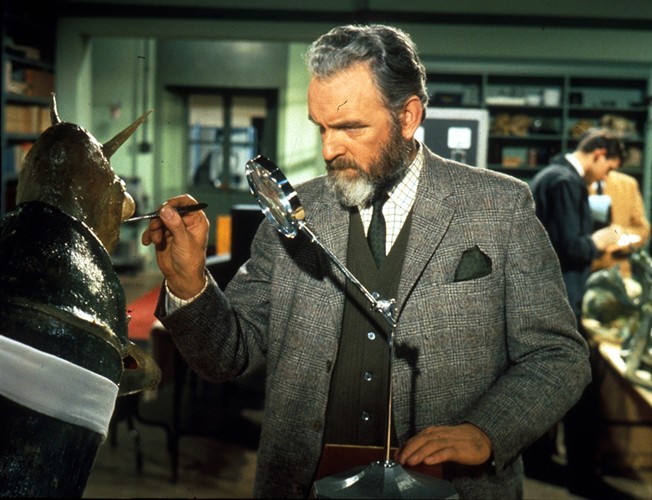 The name Quatermass has been iconic in British popular culture ever since 1953, when Professor Bernard Quatermass arrived to save us from aliens and de-mythologize the origin of The Devil. From its BBC television beginnings to Big Screen adaptations, writer Nigel Kneale’s thoughtful creation has stimulated and excited fans of conceptual science fiction.

The 1958/59 TV serial of Quatermass and the Pit had considerably more time to let its ideas breathe than this 1967 Hammer production. However, one of the pleasures of Roy Ward Baker’s film is its condensing of a remarkable storyline. Nigel Kneale wrote the script thus keeping many of the details kept sharply intact.

A mysterious object is discovered at the building site extension to London’s Hobbs Lane tube station. Many sightings of The Devil were recorded as having occurred in the vicinity. The object concerned is a spacecraft containing long dead insect-like creatures who turn out to be Martians who briefly colonised Earth and subsequently influenced human evolution to create earlier manifestations of evil in the form of The Devil. Professor Bernard Quatermass (Andrew Keir) aided by Palaeontologist Dr. Mathew Roney (James Donald ) and his assistant Barbara Judd (Barbara Shelley), are forced to combat a spacecraft, drawing its destructive power from the broadcasting equipment on the site.

Although it would be a shame to divulge the plot by describing the film’s climax, the ending is rather predictable, and we are left to witness the disturbing after-effects which are just as impressive as the film’s deliberate inconclusiveness. As Quatermass and Judd stand in the street, a serious of subtle dissolves picture them, still reeling from what they’ve witnessed. Baker’s choice of a long take conveys a powerful impression that the horrors in the pit will still rage within us, together with the awful racial memory that we are part-Martian is embedded in our genes; that this cannot be expunged, and accounts for the aggressive human need to wage war: “We’re the Martians now” says a character in the film: retaining a power to chill and undermine us earthlings. So roll over H.G.Wells’s and his War of the Worlds Martian invasion – it occurred millions of years ago!

Hammer is so stamped with the identity of period horror melodrama that you forget that it was once a studio that produced its own British B picture Noirs and Sci-fi. Surely QUATERMASS AND THE PIT ranks alongside Losey’s The Dammed as their best excursions into Sci-fi. Yet QUATERMASS is also a successful blend of horror and Sci-fi. In the green slimy monster department it scores highly, rather than absurdly, as the convincing models of the Martians, when cut with a scalpel, produce an emetic green liquid. (Moments like this greatly compensate for the killing of army officer Colonel Breen – Julian Glover, for the special effects, for his fried-up body, are really crude.)

Nigel Kneale was a brilliant popular writer for TV and film who knew how to communicate important themes such as race memory, evolution and the nature of evil. You can place Quatermass and the Pit (both film and TV version) up there with 2001, Village of the Dammed; Unearthly Stranger; The Dammed and Under the Skin as titles that opened up intellectual mystery on so many fronts that you instinctively think as much as you shudder. Alan Price©2017

NOW OUT ON BLURAY COURTESY OF STUDIOCANAL