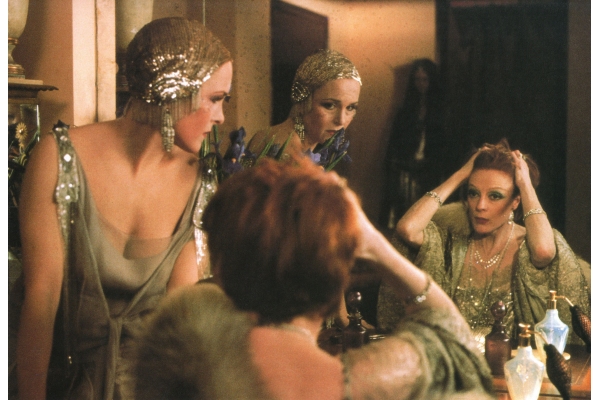 Perched between Jane Austen in Manhattan and Heat & Dust; Quartet, based on the novel  by Jean Rhys 1890-1979) and adapted director by Ivory and Ruth Prawer Jhabvala, is a promise of what this talented duo would achieve later with the EM Forster trilogy of Room with a View, Maurice and Howard’s End. The autobiographically novel by Rhys, re-telling her affair with Ford Maddox Ford, was ripe for the big screen, and, once again, the lush look of it all compensates for some weakness in the script.

Set in depression era Paris in the mid 1920s, where everywhere pretended to be an artist, even though few actually created real art, we are introduced to Polish born art dealer Stephen Zelli (Higgins) and his wife Marya (Adjani), who was born – like Rhys – in the West Indies. Stephen is soon written out of the storyline – at least for a while –  imprisoned for selling stolen paintings. Marya, penniless and lonely, is taken under the wing of wealthy British couple HJ Heidler (Bates) an art promoter and his wife Lois (Smith), a painter. But the hospitality soon wears thin: Mr Heidler makes unwelcome visits to Marya, sleeping in the guest room, and Lois turns a blind eye. She is well that his actions caused the death of another hapless guest who committed suicide once he withdrew his favours. And when Stephen finally comes back into the picture, and has the chance to save his wife from the clutches of these ‘vampires’, he choses not to. Drama ensues – though without death and destruction.

We see the world through Marya’s eyes: she is the epicentre, even though a rather phlegmatic Pernod-driven one, her senses blunted as she drifts into passive acquiescence. The novel was told in the third person, but the screen version never really gets into Marya’s mind, leaving her overly enigmatic, her motives explored. This state of limbo facilitates the Heider’s domination, as they feast on an innocent. So we are left in a moral quandary with these contemptuous characters: Heidler a cruel manipulator, his wife desperate to hold on to him and keep up the facade, even if it means hurting another.

Isabelle Adjani took home the awards for Best Actress at Cannes 1982 for Quartet, although she is slightly miscast in her of role of placid waif, and much more at home in Zulawski’s Possession (1981) which also won her the Cannes acting prize. Alan Bates and Maggie Smith on the other hand, are ideal as the evil ‘parents’, always ‘playing the game’ but never accepting the reality of their exploitations. Higgins is rather weak in a underwritten role. DoP Pierre Lhomme creates a visual paradise worthy of a real artist, letting light and watercolours play over designs and faces, creating a dreamlike atmosphere in contrast to the brutal psychological war of HJ Heider. Two years later, Lhomme would photograph Adjani in a similar role in Claude Miller’s Mortelle Randonne. One of the co-producers Humbert Balsam, would later commit suicide and become the tragic anti-hero in Mia Hansen-Løve’s Le Père de mes Enfants. AS

NOW ON CURZON WORLD AS PART OF THE MERCHANT IVORY SERIES.