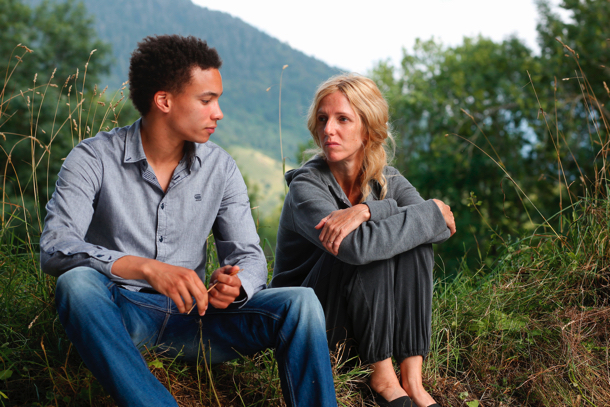 Revered writer|director André Téchiné portrays adolescent sexual awakening, loss and love in the snowy landscapes of the French Pyrenees. Wild Reeds will spring to mind here, as will his co-writer Celine Sciamma’s rites of passage films Tomboy and Girlhood. But this is a work of multi-layered subtlety that pictures two rival teenagers at loggerheads in a close-knit community where change comes slowly and in unexpected ways

Poignant upbeat but always real BEING 17 has a searing sense of place and of the local traditions in this farming community as it moves through three seasons winter, spring and summer. Stunningly captured by cinematographer Julien Hirsch’s spectacularly scenic shots of vermillion sunsets and icy mountain vistas, the story opens at the cattle farm where teenage Thomas (Corentin Fila), the bi-racially adopted son of Christine (Mama Prassinos) and Jacques (Jean Fornerod) helps out with the animals while studying at the main lycée several hours ride away in the valley. A loner, he resents the more intelligent Damien (Kacey Mottet Klein), a gawky but sensitive kid who doesn’t hide his talent in the classroom. That prompts Tom to beat him up after school, but Damien is too tough let it worry him. Living in the lcoal town with his doctor mother Marianne (Sandrine Kiberlain) he also enjoys boxing, training locally with old family friend Paulo (Jean Corso).

Damien’s father, Nathan (Alexis Loret), is in the French airforce stationed oversees. Marianne treats Thomas’ mother Christine one day and discovers she’s pregnant. Marianne invites Thomas to stay while his mother is resting, unaware that the two boys are sworn enemies and she secretly quite fancies Thomas. The boys’ animosity is pictured in frequent punch ups that somehow start to spark feelings of another nature between them. Klein was pictured in the equally snowy Sister (2012) and has since blossomed developing an raw and piercing sensitivity in his acting which he brings to his role as Damien. As Thomas, Corentin Fila has his own fawn-like sensuously tempered with impetuousness.  The genesis of their relationship is so subtle as to be imperceptable but gradually manifests itself from close contact during their tussles. Drawn together from lonliness and, to a degree, isolation it is bred from a mutual longing for emotional and physical closeness  but is conveyed in bewildered feelings of insecurity and is tenderly moving to watch. There are so many strands here interacting and evolving, yet Téchiné blends them seemlessly together to create a dynamic that feels natural and inevitable as life in village moves on. For her part, Kiberlain lights every scene as a warm and loving mother who is also intuitive, kind and completely natural.

The occasional score is judiciously sparing at just a few points and the tone natural throughout, this is an immersive and satisfying French drama which, along with Things to Come, is sure to go down well with the arthouse crowd.