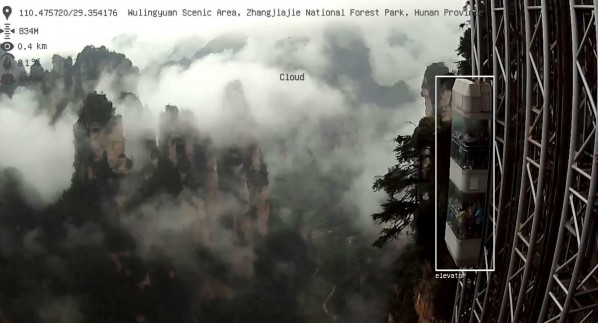 A young woman leaves a Buddhist temple where she has trained as a Nun, in this evocative Chinese drama created entirely from surveillance footage from with celebrated conceptual artist Xu Bing. DRAGONFLY EYES is an unsettling watch but a poetic one that melds conceptual art with cinema: Just the kind of fare that makes Locarno Film Festival tick with the edgy inventiveness that makes it different and daring.

Relying on prestige editing and clever sound design DRAGONFLY EYES rocks with a rakish rhythm while offering audiences essential time out to contemplate its artful originality. This bracing feature recalls the work of Polish artists Anka and Wilhelm Sasnal Fresh and Thai maestro Apichatpong Weerasethakul. Other artists in the shape of Matthieu Laclau and composer Yoshihiro Hano collaborate on the film scripted by the poet Zhai Yongming whose writing responded to the found footage, rather than the conventional way round. Dragonfly Eyes also features computerised voice techniques that alternate between calm chanting and more rasping vocal sounds.

After Qing Ting (‘Dragonfly’, in Chinese) has left her holy home, she finds herself working in a milking factory where she confesses to her colleague Ke Fan that she’d like to set one of the cows free. The cow in question is then seen wandering off down a road in the dark, and footage of various road accidents follows suggesting a doon-laden outcome. The next minute Qing Ting is in a dry cleaning shop and Ke Fan appears to be stalking her as they embark of a tense on/off affair. What emerges feels like the classic misogynist scenario of modern times but the experimental form it takes feels bizarre and often alarming, punctuated by an atmospheric electronic soundtrack. Different but definitely daring and fresh. MT