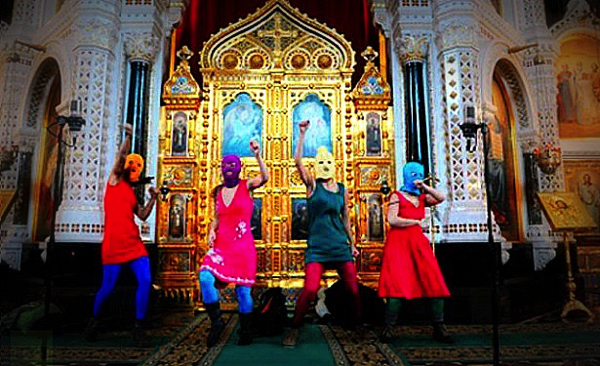 Along with Andrei Gryazev’s Tomorrow, Pussy Riot furthers the dialogue on freedom of speech and the individual in the Russian Federation with this stirring and well-crafted documentary.  Even if you don’t like the band’s particular brand of music: a blend of early British Punk Rock with jazzed-up ecclesiastical overtones, you have to give the Pussy Rioters top marks for raising awareness of the country’s current social and cultural climate.

Opening with an apposite Bertholt Brecht quote, this snapshot of modern Moscow kicks off with one of the trio, Nadya Kolonikova, airing her feelings in a pleasant and gentle way about the cause she fervently espouses, stating candidly that her hatred of Putin stems from his overzealous nationalism on the World stage. Meanwhile on the Church stage in Moscow’s Cathedral of Christ, the band sport brightly coloured ‘fluor’ balaclavas. They look like jokey bank-robbers but their only crime is violating the Church’s dress code, genuflecting with guitars and offending local worshippers with their insulting riff, along the lines of “Occupy Red Square”; and “Rid Us Of Putin”.  This leads to forcible arrest.

The film has an experimental feel: A handheld camera yields dizzying footage of the streets of Moscow intercut with timelapse sequences of the skyline at night, contrasting with the drab interiors of the court room and the detention centre where the girls are taken on their arrest in February 2012.  The tone of the piece is calm and inquiring rather than dramatic or subversive and interviews with the girls and their families are measured and informative without a hint of bitterness or anger.  Nadia speaks softly and convincingly of her plight and love for her father.  He decided to support her musical talent and gives insight into her rebellious streak, hinting at his divorce from her mother as possible grounds for her need to seek recognition in this way: it’s a portrait of a loving and affectionate dad.

To Western eyes there’s nothing scandalous about these girls in hooded balaclavas rampaging around with guitars, albeit in a Church. It all rather feels like a storm in a teacup. What is serious though is the image that emerges of modern Russia as an old-fashioned society full of traditional and draconian figures and a repressive legal system that forces petty criminals to give their evidence from within metal cages in the city court rooms, while outside frenzied protesters chant slogans for freedom amid the whirring of cameras from the Press pack . For his part, in dour interview mode, Putin claims he has a duty to protect the views of the orthodox mainstream. As a result, two of the girls are sentenced to serve seven years in a penal colony.

In a flash of glamour, Madonna wades in to Moscow to lend her support or maybe just to garner publicity for yet another physical transformation: it’s difficult not to be cynical but it feels as if the Russian Federal Republic, from a human rights perspective at least, is still hiding behind a rather dishevelled ‘Iron Curtain’ of sorts, despite its pretensions as a 21st century World power. MT

Then watch the DocHouse Q&A with co-director Mike Lerner here.