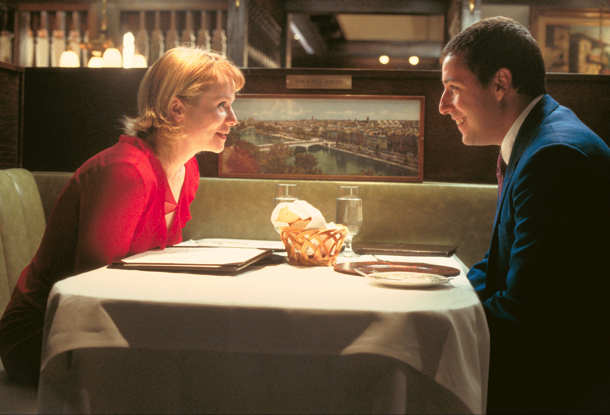 Adam Sandler is the star in Paul Thomas Anderson’s febrile and jittery black comedy romance in which he plays Barry, an emotionally buttoned-up novelty supplier in thrall to an after hours telephone chat line, suddenly emboldened and redeemed when he falls in love.

After the confident dramas Boogie Nights and Magnolia, PUNCH-DRUNK LOVE feels like a cinematic volt face for Anderson, almost as if he has wandered into the realms of Northern European arthouse cinema of the 90s and decided to change his style, specially when the love interest here is Emily Watson (Breaking the Waves).

Drenched in its cold detached aesthetic, the film drifts into some unsettling themes and feels strangely prescient of a future where chatlines provide a subliminal twilight zone where men can get their rocks off while outwardly seeming as macho and in control and they ever were, in between random psychotic outbursts, which Sandler conveys in a deft performance of comic complexity.

Here in a cavernous warehouse somewhere in California, Barry is overworked and underpaid but has discovered a scam where he can earn a fabulous amount of air miles simply by purchasing a type of canned pudding in the local supermarket. And his family offers no sanctuary. Teased by his overbearing sisters, who taunt him with a story of how he once broke a window pane with a hammer, he confesses to his brother in law that his life is in emotional turmoil and he suffers from anger issues (preparing him for his role in Peter Segal’s comedy Anger Management).

On a date with Emily Watson’s empathetic but slightly predatory Lena Leonard (a friend of his sister), he gets so hot under the collar that he escapes to let off steam by trashing the restaurant lavatories, returning calmly to face the restaurant manager. This pent up and tortured scene finally ends with him surrendering and kissing Lena. But in a weird subplot, he is then bundled into a truck and attacked by extortion thugs, controlled by Philip Seymour’s bullishly livid businessman,

Emily Watson is well cast here as she comes across as slightly unhinged but also placid and conciliatory as Lena. After the kissing scene, Barry desperately calls directory inquiries for her number (cue psychotic outburst) before loudly interrogating her (“do you have a boyfriend, well when did you last have a boyfriend?”) from a telephone box on a noisy street full of passers-by.

Turns out she already fancied him from a family photo. So when he follows her on business to Hawaii everything goes swimmingly until they end up in bed, when calmly confesses to “wanting to smash her face up with a sledgehammer” as they quietly make love. But there are more sinister events that slowly unfold in this sinuously disturbing and bracingly refreshing comic film about latent male aggression and dysfunctional romance, brilliantly set to Jon Brion’s flighty and discordance score. MT

AVAILABLE ON BLURAY COURTESY OF CRITERION UK FROM 21 NOVEMBER 2016.