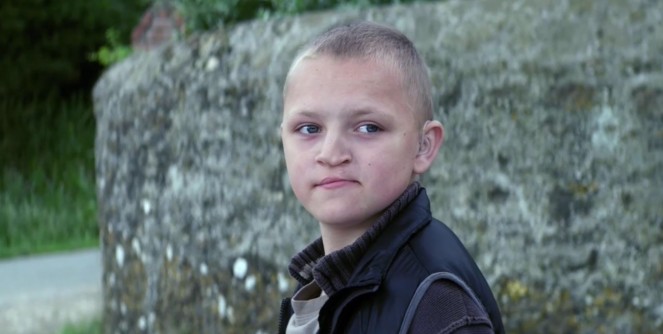 Having left his sensationalist and violently misogynist early period (Humanite/Twenty-nine Palms) behind, Bruno Dumont, former lecturer of Greek and German philosophy, has set most of his work in the region near Calais, where he was born. Seen as the heir to Bresson, his topics always are discourses about death and the same can be said about P’tit Quinquin.

Apart from the format (a four part TV series, which can be watched as well in its totality) what is most surprising, is Dumont’s use of humour, however dark it sometimes becomes. Set in rural Picardy at his birthplace of Bailleul, P’tit Quinquin is seen through the eyes of the title hero, played with great vigour and enjoyment by Alane Delhage, a non-professional actor like the rest of the cast. The young adolescent is nearly always accompanied by his girlfriend Eve (Caron), the two playing a loving couple like the leads in a school play. On the opposite side is the other “pair”, Commandant Van der Weyden (Provost), a detective with a manic tic, and his side-kick, Lt. Carpentier (Jore), the former send to the small town and its surrounding villages to clear a murder. Unfortunately for hopeless policemen, the longer they stay, the more murders happen, until Van der Weyden has to confess that they are confronted by an evil serial killer.

The first victim, a Mme. Lebleu, whose corpse, cut into small parts, is found in the belly of a cow. Since cows are not carnivores, Carpentier deducts rightly, that the animal is suffering from mad cow disease. Soon the detectives discover that the dead woman had a lover, a certain M. Bhiri, whose is missing, and found murdered soon after. The main suspect, M. Lebleu, shares the same fate as his unfaithful wife, and Van der Weyden begins to see an apocalyptic picture developing. The next victim (this time a suicide) is a young Arab student, who fancies Eve’s older sister Aurelia (Hartmann), a local celebrity who aims to sing on TV. But the young man is driven to despair, when Aurelia’s friend Jennifer calls him “a monkey, who should go back to Africa”. Aurelia, covering up for her girl friend, is the next victim of the killer, and eaten by pigs. When the policemen find out that Quinquin’s father has kept it secret that the first murder victim was his brother’s wife, he becomes the prime suspect, before another unfaithful wife, Mme. Campin (Longuet) is found murdered at the beach…..

Dumont uncovers a society, where life is full of contradictions. Beneath seemingly benign normality – nothing is as it seems to be: the priest laughs during a funeral, the local band makes a mockery of Bastille Day, Carpentier is more interested in stunt driving with his police car than in solving the case, whilst his boss nearly falls of a horse and rambles on about the similarities of women, horses and paintings by Rubens. And meanwhile Quinquin throws firecrackers where ever he finds a target.

Needless to say, Dumont was not aiming for a “who-done-it”, but a tableau of human frailty. Guillaume Deffontaines, who photographed Dumont’s last film Camille Claudel 1915, uses widescreen successfully to integrate the landscape with the actors, achieving a pastoral idyll, betrayed by the viciousness and heartlessness of the protagonists. The first sequel is titled “La bête humaine”, easily the description of what is to follow. AS

| THE FOUR PARTS RUN AS A ENTIRE SCREENING OF 3. AS A TV MINI SERIES | NOW ON DVD