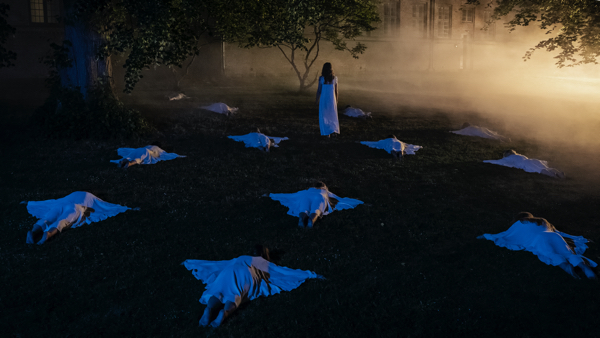 Danish director/co-writer Marie Grahto had great success with her medium-length films, particularly Teenland. Her first feature film Psykosia, is an enigmatic story set in a psychiatric ward, where the limits of patient/doctor relationships are tested to the full.

When middle-aged Viktoria (Carlehed) enters a psychiatric institution ran by Dr. Anna Klein (Dyrholm) to help with a particular case, we can’t help finding the environment and the relationship between the two odd. The whole place has a distinct mid-twentieth century twist making it feel like a place lost in time.

Viktoria is a researcher specialising in suicide, but she has no clinical experience so it’s surprising that Dr. Klein employs her at all. The only patient Viktoria will look after is a teenage girl, Jenny Lilith (Viktoria Carmen Sonne of Holiday fame), who has a history of suicide attempts, and so far has allowed none of the therapists to come close to her.

Jenny is close to another patient, Zarah (Kreutzmann), the two of them have been hospitalised together on numerous occasions, and they even end up sharing a bath, the water turning red after Jenny slashed her arm. Jenny tells Viktoria “death is purity, in death you are free”. Their therapeutic sessions have also helped the women to bond, but one gets the impression this is due to transference, Viktoria trying to get to Jenny via self-disclosure, mentioning her own strict upbringing.

In a chapel, next to an enormous abandoned church, Viktoria tells Jenny “that psychoanalysis is a form of art, like this chapel. After Viktoria tries to hang herself on several occasions, claiming her thoughts of suicide “can be a comfort, keeping you alive”.

When Zarah commits suicide, Dr. Klein asks Viktoria to tell Jenny the truth, but the former is unwilling, not wanting to risk the therapeutic progress she has made with her patient. Dr. Klein, looking out of the window like a threatening Super-Ego, seems to will Viktoria to make the announcement, just before the denouncement of the mysterious conundrum.

There are many coded clues to what is going on here: Jenny’s full name is Lilith, a wanton woman in Jewish mythology; Anna Klein is an amalgamation of Anna Freud and Melanie Klein, founder and rivals of theories in child development. And certainly the closeness and identification between Viktoria and Jenny is a play on transference, used by analysts to get close to patients – but leaving them often helpless when patients use counter-transference to draw the analyst in.

Subtle and nuanced performances from a strong female cast, DoP Catherine Pattinama Coleman (part of an all-women crew) using her long takes in the institutional corridors to mesmerising effect, recalling the atmosphere in Kubrick’s The Shining. Music by Schubert (Der Leiermann) and the Francoise Hardy song ‘Il est trop loin’ help to create an atmosphere of utter bewilderment, where the borders between reality and spirituality, patients and analysts are not the only things breaking down. Sheer genius. Shame the film is still waiting for a UK release. AS