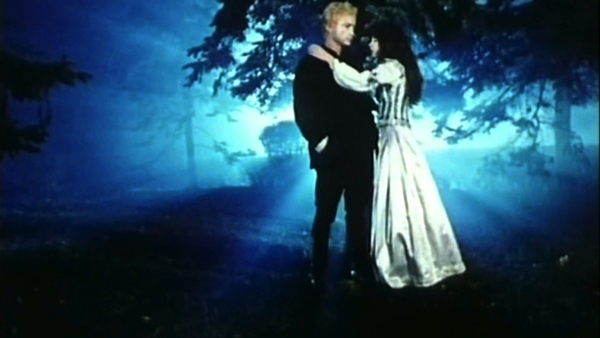 Hungarian director Bódy Gábor, (1946-1985, Budapest), was a provocateur and pioneer of the Hungarian ‘New Sensibility’ film movement whose controversial arthouse features garnered critical success at home and abroad where he won an award at Locarno for this dreamlike Avantgarde masterpiece completed in 1980, a few years before his death by suicide in 1985.

Adapted for the screen with writers Vilmos Csaplar and Vera Varga, Narcissus and Psyche is based on Hungarian poet Sándor Weöres’s Psyché (1972), an anthology of letters and poems by a fictional 19th-century female poet Erzsebet Lonyai (aka Psyche played by Patricia Adriani ). The arthouse drama is full of surrealistic elements, philosophical symbolism and visual experimentation with the use of slow-mo; time lapse sequences; hypnotic sex scenes; motion trails; and colour filters, it spans a century (between the Napoleonic wars and the Second World War,) yet is miraculously condensed into a lifetime experience exploring Psyche’s enduring love for Narcissus (a blond haired Udo Kier). Their affair is often ambivalent but never consummated and withstands a lifetime of influences from other relationships, sexual disease and tragedy.

This mesmerising tour de force is extraordinary to look at and was shot by renowned cinematographer Istvan Hildebrand with a score by My Twentieth Century composer Laszlo Vidovskzky that feels both modern and classical. With a running time of nearly four hours, the epic is told in three parts. There are striking slo-mo love scenes set to harpsichord music that draw us into the action yet remain intimate and erotically poetic. Other love-making sequences feel more remote and salacious, such as the one set by a blazing fire while stoats and wild animals roam around the vast stone-floored bedroom of an enchanted castle, where later a ballroom scene sees dancers swirling around in a 3D style masterstroke.

One elicit scene features the Pope pulling up his trousers after enjoying a blowjob from a young male courtier. He then gives an audience which is filmed from underneath the glass floor to reveal the sparkling soles of his diamanté slippers. Psyche herself emerges a sultry and tousled haired beauty, always ready for a new liaison she is libidinous and licentious and runs the gauntlet of male attraction much to the chagrin of Narcissus who suffers from syphilis contracted from gypsies earlier on in his life. Psyche is seduced, used and lusted after – in an inspired and lyrical depiction of life for most attractive women, even today. Narcissus remains her soulmate, teacher and friend but she is forced to marry an indifferent nobleman and this plot line is the thread that runs through this jewel-like richly textured tapestry. MT