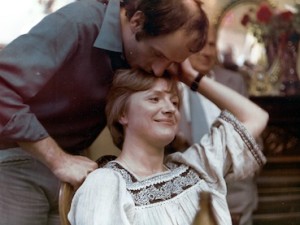 KTORZY PROWINCJONALNI (PROVINCIAL ACTORS, 1978) is Agnieszka Holland’s debut film. Set in a small town in contemporary Poland, a Warsaw filmmaker (Burski) comes to direct a small touring theatre troupe in Wyspianski’s ‘Liberation’, a patriotic Polish classic. The main actor, Krzystzof, wants to make a name for himself, and tries to influence Burski to stick religiously to the text. But Burski has other ideas: he wants to chang 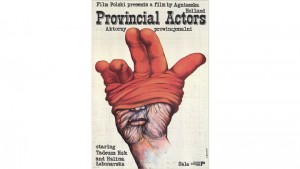 e the play into a sensational avant-garde version, cutting the text down to the bone. Krzystzof fights the director all the way, but after the premiere, he gives in, making peace with Burski, to save his career. But his marriage to Anka, a puppeteer, is on the rocks. Anka leaves her husband. She too, has come to realise through experience, that advancement in Polish society comes with a loss of innocence.

Whilst Holland’s actors as not particularly sympathetic – and usual gossip about which actress beds the  director; the gay outsider and an alcoholic – society is blamed as much as the individual. Anka is shown as an idealistic dreamer who still reads Heidegger, and is ridiculed by her husband. Krzysztof starts using great words like “homeland, human fate and freedom” from the play, to make himself look more intellectual than  the rest of the cast, but he is only too ready to fall in with Burski’s interpretation. A personal crisis causes him to run to Anna (whom he had just condemned as naïve), at heart he is a little boy who really wants to go back to the safety of his mother. Contrary to some western perception, PROVINCIAL ACTORS, which won the ‘FIPRESCI’ prize in Cannes, is not a thesis film, Holland declaring “I don’t know how far I have been successful, but in my debut I was less concerned with showing the mechanism of manipulation, and more with presenting human fate, in all its embroilment and entanglement. That is, I tried to highlight the existential aspect rather than a journalistic one. I didn’t want a film with a thesis, though I have sometimes been accused of this”. Although Well-acted and masterfully crafted, this is a great introduction to Poland’s first significant female filmmaker. AS