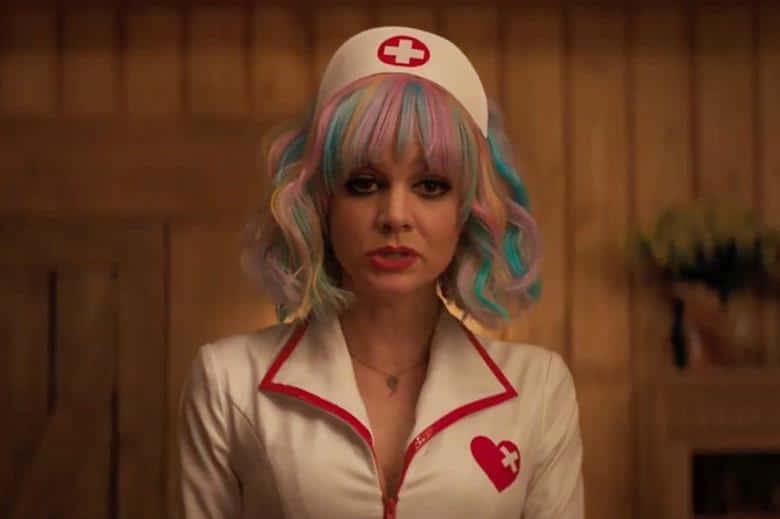 Killing Eve’s Emerald Fennell is behind this sardonic female revenge flic but the firepower comes courtesy of Carey Mulligan. Obviously the writing is spot on in its feminine guile and intelligence but Mulligan takes it a notch even further adding gutsy gravitas to her outwardly ditzy blond lead.

She plays 30 year old part time coffee barista Cassandra who seems to have her sh*t together despite being half-cut most of the time. Very much like the sparky heroine of Fleabag she loves to give the appearance of being dumb but is actually highly shrewd and very much the mistress of the putdown, if ever the was one, toying with her male suitors while actually being bored rigid by their facile advances.

The self-determining Cassie is very much her own person, with a cast iron sense of self and considerable aplomb. She is also extremely good-looking in a wholesome self-assured way, playing her parents off against one another when they try to infantilised their ‘baby’ only daughter.

So what starts as a putative female revenge story soon develops into something much more interesting and amusing, a whip-smart psycho comedy that never takes itself too seriously, and never gets overly kooky in the US mumblecore style. The tonal shifts are brilliantly managed. The first sees the film darken in a worrying way about half and hour into the action when we learn Cassie once held a promising career as a doctor before a mysterious event derailed her future, and involving a girl called Nina. When she meets up with an old schoolfriend who regales her with news of their former classmates.

Fennell accompanies this switch in gear with a sinister soundscape that sees Cassie trawling tight-lipped through her social media to track down one Madison (Brie). The following day the two ‘do lunch’ and the supercilious back-biting flows: “Do you have kids?…you’ll get there…” simpers Madison. “Guys say they want a feminist in College ‘cos they’ve heard that they do the best anal. But at the end of the day they all want a ‘good girl’.” This is the American equivalent of BBC’s Fleabag but there’s an unsettling underbelly to the scenario, and an ongoing narrative with a sinister undertow. We know all along that Cassie’s no ‘nice girl’ but she soon shapes up to be seriously vindictive as the storyline develops, and Mulligan is absolutely phenomenal, bringing considerable weight to the part, which shows her in an entirely new light. We also become emotionally invested in her character.

And Cassie exacts revenge – not for herself, but on behalf of her schoolfriend  Nina who was violently gang-raped, one guy going on to a career as a US Supreme Court Justice, Brett Kavanaugh. And the way she does it is chilling and highly amusing, bringing the woman who facilitated his passage into the law to her senses. An incident with a pick-up track is scored by Wagner’s darkly epic piece “Liebestod” from Tristan and Isolde. Next up is Alfred Molina who gives a convincing cameo plays as another legal miscreant, and gets off by being appealing sincere. Meanwhile an incipient romance bubbles along with Bo Burnham’s medical doc Ryan. This has its tender and meaningful moments in a stop, as they two try to work out how to get it on. And once again the tone successfully morphs, this time into a winning candy-coloured romcom sequence illustrating the transformative power of love and understanding.

But at this stage we are only just warming up to the story, as Ryan gets his knees under the family table chez Stanley (Brown) and Susan (Coolidge), Cassie’s parents. The Nina story develops into a serious case of sexual misconduct of the #MeToo kind, and Ryan is deeply implicated. And Cassie is not going to let him get away with it, unable to move on with her own life and caught in a cycle of retribution. Once again Fennell accompanies her change of tone with another screeching soundscape.

But then the mood makes a terrifying volte-face, as Cassie’s plans to revenge Nina come off the rails, and she finds herself fighting for her life in a shocking finale, as Fennell pulls more tricks out of the bag in her twisted tale that sees Cassie getting the last laugh in this impressive tonal hotchpotch that is tragic for everyone concerned. MT