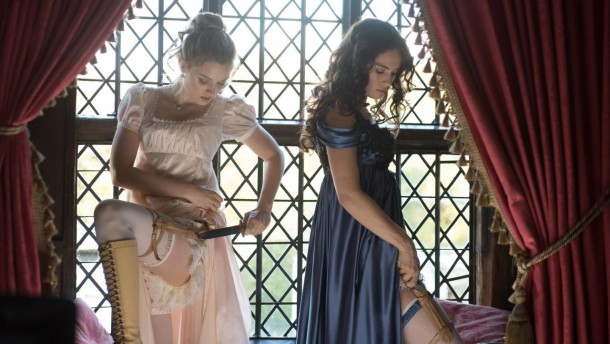 Jane Austen’s Pride & Prejudice is a household classic successfully adapted for screen on various occasions. Zombie films such as Shaun of the Dead have also garnered much popularity, so why not meld the two together in a lavishly mounted period romp with a solid British cast and you cannot fail to win at the box office, right?

Wrong. With the best intentions Seth Grahame-Smith has over-complicated his script for P&P Zombies: this stylish low-budget affair has all the right credentials: ravishing settings; decent actors; (Charles Dance, Sam Riley, Jack Huston) and some sumptuous costumes and accoutrements – and created a fantasy horror that imagines the appearance of zombies in the quaint 19th century location of Hertfordshire (well-known for its Wicked Lady – but she was very much alive).

Lifting vast swathes of the original page and blithely inserting the word ‘zombie’ in an opening scene, he contrives a zombie tale that pales into insignificance compared to the original, thus bleeding the film dry of any amusement with the absurd and insulting premise the aristocracy rise up and wage war on their zombie interlopers whilst the proles are ravaged to death.

Lizzie Bennet (Lily James) and Mr Darcy (Sam Riley) fall in love while trying to combat the enemy who talk and even think, making them irritating to outmoeuvre as well as difficult to quell. Despite his young age, Sam Riley’s acting chops seems to have peaked and he is sullen and buttoned in the role of Colonel Darcy, rather than dashing and suave. Lily James, meanwhile, shines as gutsy go-getter Lizzie Bennet. The straight scenes come alive thanks to a patrician Charles Dance and darkly dishy Jack Huston, but Austen devotees will not appreciate the original vixen Lady Catherine DeBourgh (Lena Headey) becoming a feisty zombie slayer in this version, which nevertheless retains its early 19th century period detail down to last bonnet with some sexy lingerie peeping through.

The problem with P&P Zombies is that not even the solid cast and Steers’ competent direction can make sense of the cumbersome and rather silly storyline which is mired down in zombies’ mess whenever it tries to offer something fresh and entertaining.  If you’re going to re-make the original then at least make it original – and entertaining. MT